Imagine you had the rights for a domain someone really rich and powerful wants to buy. What would you do? Try raising the price until that person denies you? Give the domain to her so you can get famous on social networks? Or just be a normal person and ask for a relatively small amount of money that you know is enough for a simple internet domain?

Well, one student from India did have a chance to sell domain he bought the rights for to no other than Mark Zuckerberg and he chose the third option. All of that started when Zuckerberg announced that his wife is pregnant and that their child will be named Max; Amal Augustine a college student from Kochi realized that he could get some money if he buys rights to an internet domain named “maxchanzuckerberg.org.”

You see, Zuckerberg’s wife maiden name is Chan, and if we think about it, the full name of his daughter is Max Chan-Zuckerberg. Now you see that domain actually reads the full name of Zuckerberg’s daughter, and .org is usually used for registering organizations, like for instance Max Chan-Zuckerberg charity fund. It seems that Augustine exactly knew what’s gonna happen. Just to be clear, Amal had registered domains before, so he didn’t register this domain just for the sake of money; he said: “I have registered quite a few domain names and I have been doing it for some time. I registered this domain name when their baby was born last December,”

He registered the domain a while ago, and about month ago he got an email in which buyer told them about his interest in the domain he bought. Augustin asked $700 (Rs. 45,000) and the buyer agreed to the price. The thing is that email was sent from GoDaddy, a web hosting and internet domain Registrar Company, so Augustin couldn’t know that Mark Zuckerberg actually wanted to buy his domain. He found that out when the deal closing email came from Facebook, but since he already agreed on the selling price he decided to close the deal without asking for more money. 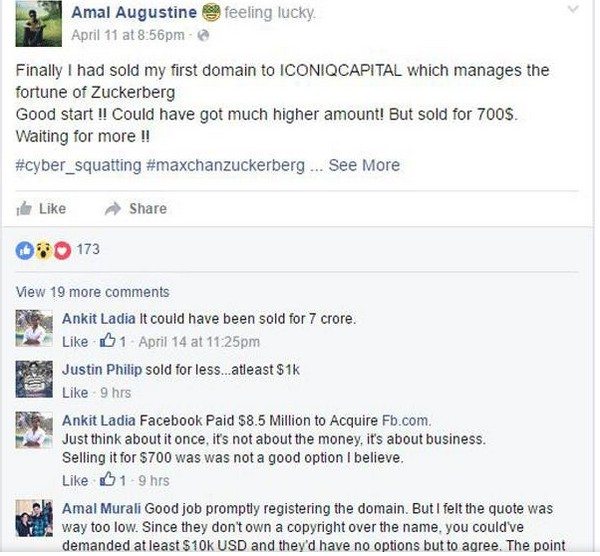 This didn’t really sounded good enough for Augustine’s friends, they told him that he should’ve asked for much, much more money, but in the end of the day, it is better to stay a good and trustworthy person and don’t get greedy. Maybe after this, he’ll eventually get a job on Facebook, or something similar, and that could be much better for him than to just forget about his first offer and decide to ask for pile load of money.