If rumours are to be believed, the ZTE 2016 flagship may come anytime soon. The Chinese smartphone manufacturer is working on its upcoming flagship device which has been codenamed A2017. A2017 is only a codename and the company is yet to announce the official name of the device. The device was recently spotted on the GFXBench and the spec sheet of the device looks really amazing.

Reports suggest that the ZTE A2017 will sport a 5.5-inch QHD IPS display and will be powered by the latest Qualcomm Snapdragon 820 chipset along with Adreno 530 GPU and 4 GB of RAM. The device will feature an inbuilt memory of 64 GB and will run on latest Android 6.0.1 Marshmallow out of the box. There is, however, no indication of a microSD card slot, so can’t say right now whether the memory will be expandable or not. 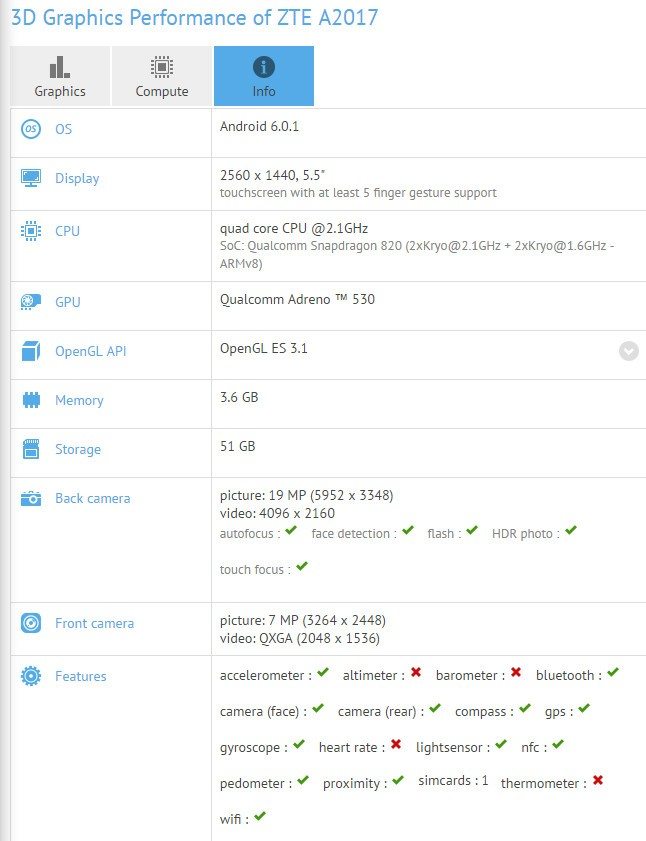 The ZTE A2017 has an impressive 21 MP rear shooter with 4K video recording capability. There is an 8 MP snapper on the front for selfies and video chat.

The A2017 features most of the connectivity options including NFC, Bluetooth, WiFi, GPS with AGPS support, etc. There is no mention of the 4G LTE in the GFXBench listing, but considering the specs of this flagship, we’re almost certain that it would support most of the data frequency bands.

The official release date and price are yet to be announced, but considering the fact that a prototype unit of the ZTE A2017 has already appeared on the GFXBench, we’re hopeful that the device will make an appearance at the TENAA, i.e., the Chinese regulatory commission very soon.

We’ll be keeping an eye on this device. Till then, stay tuned for more news and info from the tech world.