Yu Televentures‘s launch event is scheduled for Tuesday. However, its online retail associate has already revealed the new smartphone on its website. The popular Indian online retailer, Snapdeal, has listed the YU Yunique at the price of a mere Rs. 4,999 in a dedicated flash sale. In a slightly higher price of Rs. 5,499, the phone can be purchased with two back covers. 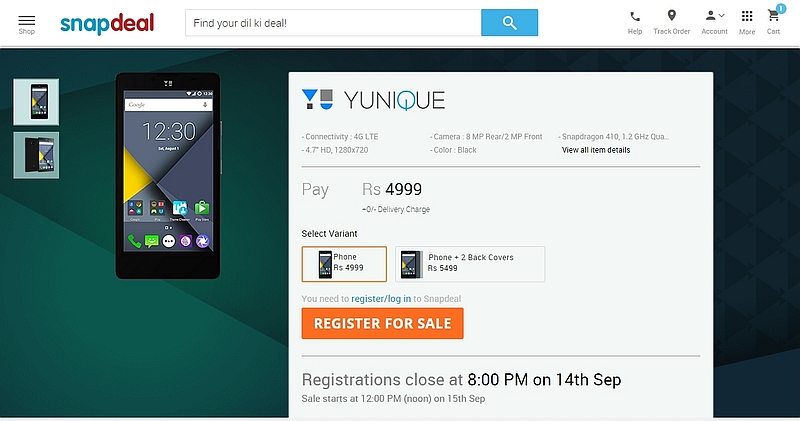 According to the Snapdeal listing and some tweets by Yu CEO, Rahul Sharma, the handset will be a Snapdeal-exclusive. The retailer listing also unveiled the features and specifications of the YU Yunique.

The double-SIM supporting Yu Yunique runs on Android 5.1 Lollipop out-of-the-box (no Cyanogen OS was recorded on the Snapdeal page). It features a 4.7-inch High Definition (720 x 1280 pixels) resolution screen with a 312 ppi pixel density and Corning Gorilla Glass 3 protection. Supported by 1GB of LPDDR3 RAM, the phone is powered by a 64-bit quad-core Snapdragon 410 processor, clocked at 1.2GHz.

The smartphone features 8GB of native storage space, which could be further enlarged up to 32GB with a microSD card. Additionally, the Yu Yunique features an 8-megapixel autofocus snapper with f/2.0 aperture and LED flash, and a 2-megapixel front shooter with 83-degree wide angle lens and f/2.4 aperture. The smartphone camera comes with several other exciting features including geo-tagging, face detection, HDR, and panorama mode.

Considering the price and specifications, we believe the handset would go head-to-head against the Lenovo A2010, which is priced at Rs. 4,990, and has similar features except the camera and the processor. Let us see which of the two records a higher number of sales!