A lot of rumors about the Sony Xperia C6 have been floating around on the web, and the phone is being touted as the possible successor to the Xperia C5 Ultra. We have already heard that a new Xperia phone, probably the Xperia C6 or the next-gen Xperia C5, might come with a 6-inch screen and a front-facing flash. And now we have a new benchmark leak to add to the facts. 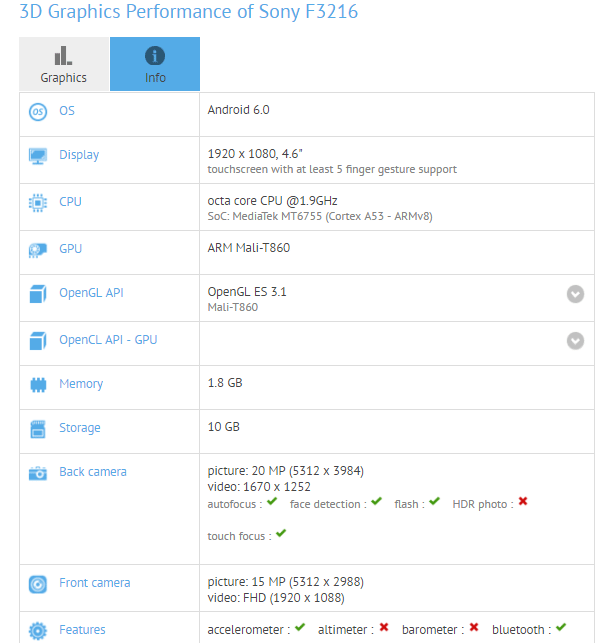 We have caught a new Sony smartphone on GFXBench, and this phone is codenamed as Sony F3216. The phone is powered by a 1.9GHz MediaTek MT6755 octa-core processor with Mali-T860 GPU. The device has got a 4.6-inch FullHD screen and is running Android 6.0 Marshmallow, but note that benchmarks often get the screen size wrong.

Also, the benchmark result states that the phone has got a 20MP rear camera and a 15MP front camera. But we all know that it is incorrect and the actual setup will surely consist of a 21MP rear camera and a 16MP selfie camera. We don’t know whether the possible Xperia C6 (or next-gen C5) has got a front-facing flash or not, but looking at the other phones in the C series, we are sure that the 16MP front camera on this phone will be accompanied by an LED flash.

Other specs of the Sony F3216 include 2GB RAM and 16GB internal storage. Nothing else is known about this phone yet, but it can guessed by the camera setup that this might surely be the next Xperia C phone.