Xiaomi may soon launch a tablet based on Windows 10 according to a reputed analyst from China. These days the global sales of tablets has seen a downward direction only due to which its more than a year, the Chinese manufacturer Xiaomi has released any tablet. Last Tablet released by Xiaomi was Mi Pad in march 2014. 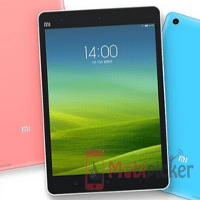 In May 2015, Lei Jun, CEO at Xiaomi revealed that company is commited to its tablet product portfolio, however at that time he has not divulged any more details, but atleast that has put a full stop on the rumors suggesting Xiaomi will be closing on the tablet products.

It is expected that Xiaomi will launch the Windows 10 tablet in the upcoming quarter, however details of specs sporting the device is not known yet and we have to wait for some more time.

Also Xiaomi is set to reveal a new MIUI version on August 16 and that day could also see a word from them on the Windows 10 tablet. However there are chances it might get delay also, as on one hand a new UI based on Android getting revealed and on another Windows 10 based tablet. But only time will tell how these things will get materialized. It will be interesting to see how Xiaomi will deal with Microsoft as they will not be able to customize the windows as they have been doing with Android.

More importantly which version of windows will be housed in Xiaomi tablet is yet to be discovered.