It’s now confirmed: Xiaomi will be unveiling its next budget flagship smartphone on September 22, and the device in question is the new Xiaomi Mi 4c. Xiaomi has already sent out invites for the launch event. Although it’s all written in Chinese, we can at least make out the date. 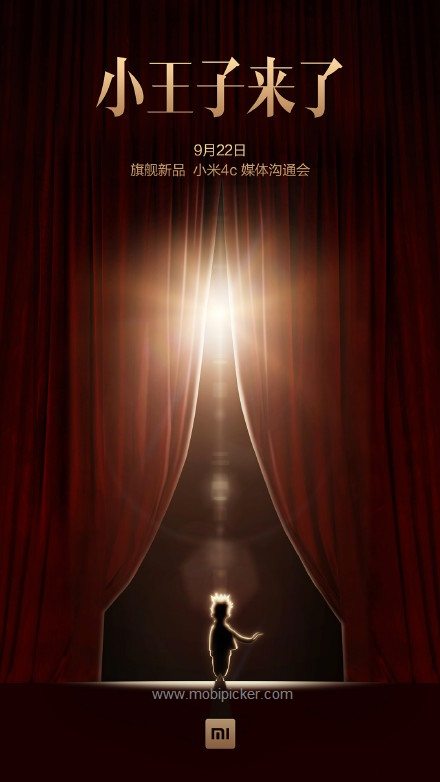 Since the last year, the Xiaomi Mi 4c is the third Mi 4 model launch. TENAA documents and leaks revolving around the Mi 4c show that the new mid-range smartphone will be placed between the Xiaomi Mi 4 and Mi 4i and will carry a very competitive price tag to give the bigger brands a tough fight.

The Xiaomi Mi 4c is expected to be similar to the Mi 4i in terms of size and design, and may have a 5-inch 1920 x 1080 display. Powering the phone will be a 6-core Snapdragon 808 chipset. The phone might launch in two versions, one offering 2GB RAM with 16GB storage while the other giving 3GB of RAM with 32GB storage. Whether the phone will feature a microSD card is still not known, but it is highly likely that the Mi 4c will support dual SIM 4G LTE.

As for the camera, the Xiaomi Mi 4c will carry a 13 MP rear and 5 MP front shooter. The smartphone is expected to run on Android 5.1.1, with the latest MIUI 7 running on top of it.

As with the other Xiaomi smartphones, the Mi 4c will be launched in China fat the Beijing launch event and then might be released globally. Those living in areas not serviced by Xiaomi will need to buy the phone from online retailers.