The Chinese smartphone manufacturer, Xiaomi, has just launched its long-awaited Mi Note Pro phablet in China, and now a leaked roadmap revealed the future plans of the company. According to leaked roadmap, the company has planned four new handsets to launch this year – the Mi 4S, Redmi Note 2, Redmi Note 2 Pro, and Mi 5. 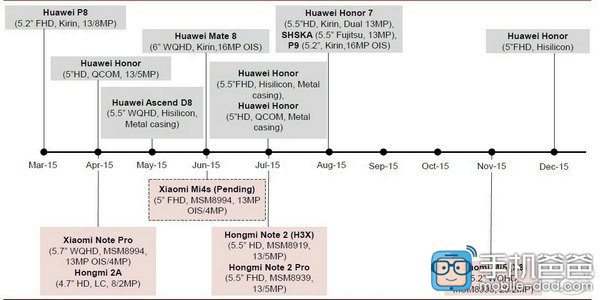 The Xiaomi Mi 4S, which should launch around the next month, sports a 5 inch 1080p display, and is powered by a Snapdragon 810 chip. It will pack 13 megapixel rear camera, and 5 megapixel front shooter.

The Redmi Note 2 will go along with 5.5 inch HD screen, Snapdragon 410 SoC, 13MP and 5MP rear and front camera respectively. There will also be an upgraded version, dubbed Redmi Note 2 Pro. It will feature a 5.5 inch 1080p display and a Snapdragon 615 chipset. Other specs are said to remain same as the Note 2. Both these handsets should see the day light in July.

The last phone on the list is Xiaomi Mi5, which should be unveiled sometimes in November this year. The Mi5 comes with a 5.2inch qHD display, Snapdragon 820 chip, and a 20.2 megapixel rear snapper.

It is worth mentioning that the leaked scheduled could be for China only and the global roll-out may take longer time.