MobiPicker
Mobiles Android Xiaomi Redmi Pro vs. OnePlus 3: What is Better Choice for Indian...
Share on Facebook
Tweet on Twitter
Deal Alert: 49% Off on ExpressVPN
Touted as #1 VPN in the world, ExpressVPN is now offering 49% off & an additional 3-months of service on its annual plans.

Xiaomi Redmi Pro and OnePlus 3 have been drawing a lot of attention of late. Both smartphones offer great specs in the medium-range segment. While they share some features, these are very different devices. If you looking for a new smartphone, these two might pop-up in your list. Let us help you decide, which one is right for you. Here’s our Xiaomi Redmi Pro Vs OnePlus 3: Specs Comparison!

Both smartphones sport a full metal body. While the OnePlus 3 looks quite bulky, the Redmi Pro sports a more sleek look. The Redmi Pro measures 151.5 x 76.2 x 8.1mm and weighs 174 grams. The OnePlus measures 152.7 x 74.7 x 7.3mm and strangely weighs 158 grams. While the One Plus 3 comes in Graphite and Soft Gold color options, the Redmi Pro will be available in three colour variants – Gold, Dark Grey and Silver.

The OnePlus 3 is supported by 3GB of RAM, and a Mali-T880 MP4 GPU. While the OnePlus 3 boasts of 6GB of RAM and Adreno 530 GPU. Both smartphones sport a fingerprint sensor for security and run Android Marshmallow operating system.

The Xiaomi Redmi Pro comes packed with dual cameras (13MP + 5MP) on the back. The dual camera setup offers a better depth-of-field and allows you to refocus the image after taking the shot. It can also record full-HD videos 30fps and slow motion videos at 720p. There is also a wide-angle 5MP camera with f/2.0 aperture in the front.

The Redmi Pro is powered by an excellent 4,050mAh li-polymer battery which offers up to two days usage. While the OnePlus 3 is backed by a smaller 3,000mAh Li-Po non-removable battery with quick charging. 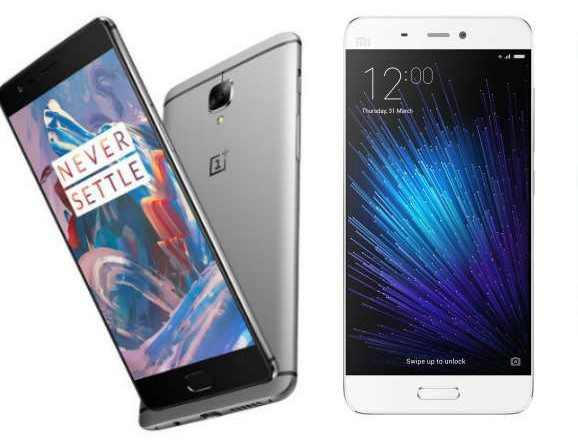 Both smartphones offer excellent processing power along with best-in-class displays. The OnePlus 3 comes with all the necessary ingredients of a flagship smartphone. It is perfect for those who are looking for a powerful device. With its 6GB RAM and 16MP camera, this one will be on top of the list for many. Non-expandable memory and a smaller battery might hold back others. In India, the phone is available for the price of Rs. 27,999 at Amazon.in.

On the other hand, the Xiaomi Redmi Pro is a great smartphone with a lot of great features. The dual camera setup and big battery backup make this one a very smart choice. It makes up for less RAM with a great CPU. Also, it offers expandable memory. The phone is currently not available in India and is expected to arrive in a couple of weeks for the price of around Rs. 17,000.

What do you think? Share in the comments section below.