The Xiaomi Redmi Pro is the first smartphone from the company to come with dual camera on the rear panel.  The rumor mill has now started spilling beans on Redmi Pro 2. Here is what we know so far about the Redmi Pro 2.

A leaked poster that surfaced two weeks ago has revealed several details on the key specs of Redmi Pro 2. Like the Redmi Pro, its successor is expected to come with the same-sized display.

It is expected to feature custom Kyro cores that is available on powerful processors like Snapdragon 820, 821 and 835 that present under the hood of flagship smartphones. Its first four cores deliver a clocking speed of 2.2 GHz whereas its remaining four cores work at 1.9 GHz. It also includes Adreno 512 graphics. The chipset can support up to two LPDDR4X RAM and UFS 2.1 flash storage. 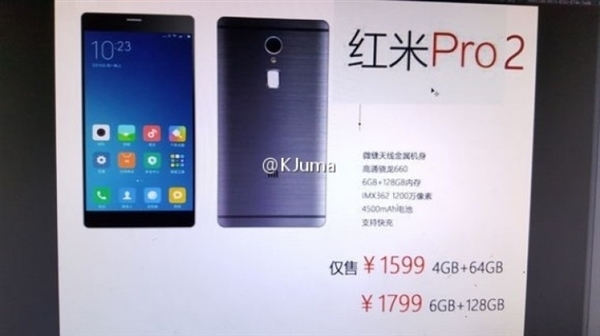 One of the most striking changes that may come on Redmi Pro 2 is that it will be coming with a single camera. It is expected to include Sony IMX362 sensor. There is no confirmation on why Xiaomi has opted for a single camera setup but rumors have it that the company has decided to  go for it on Redmi Pro 2 as the audience was not really impressed with Redmi Pro’s dual camera feature.

The Redmi Pro has a fingerprint scanner below the display. The leaked poster suggest that the Redmi Pro 2 will be coming with a rear-facing fingerprint reader. The 4 GB RAM model is pegged to cost 1,599 Yuan ($232) and the 6 GB RAM variant will be arriving with a pricing of 1,799 Yuan ($261).

The Xiaomi Redmi Pro was launched in July last year and the company has exclusively sold it within China.  Hence, its successor is expected to launch by the beginning of the third quarter of this year.  There is no confirmation on whether the Redmi Pro 2 would be made available for purchase outside of China.