Couple of hours back, we reported the Xiaomi Mi5 specifications leaked by @kjuma, a Weibo user in China. But it appears, no one has a clear idea of the real figures, as the same tipster has now posted the different specs of the phone.

According to his latest leak, the Xiaomi Mi5 will sport a 5.2 inch display with 2K resolution, and will be powered by a Snapdragon 820 chipset, compared to Snapdragon 810 reported earlier. Running MIUI6 (earlier MIUI7) based on Android 5.1, it will pack a 4GB of DDR4 RAM, and 16GB / 64GB built-in storage. The camera specs are also changed from 16MP to 20.7MP primary snapper, and a 13MP to 5MP front-facing camera. Though the battery capacity is not mentioned this time, the quick charge technology is still included. 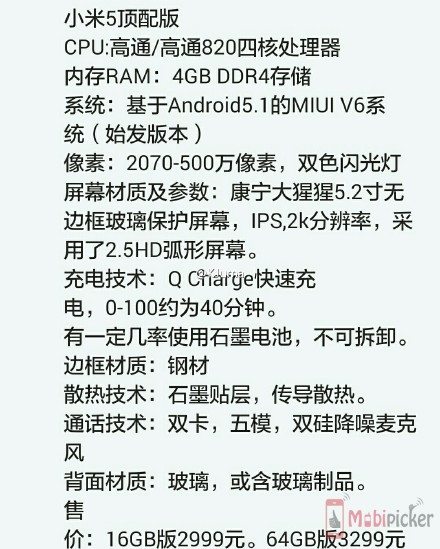 According to our exclusive report published on June 1, the Xiaomi Mi5 is expected to come with a 5.3-inch screen with 2K resolution, Snapdragon 820 chipset, 4GB of RAM, 16/64GB storage, 16MP primary camera, a 6MP front-facing camera, fingerprint scanner, a 3,030mAh battery, and Android 5.1 Lollipop.

Though the current report from kjuma is somewhat similar to our report, there are still variation in display and camera parameters. So we need to take it with a big dose of salt and should wait for official statement from the company.