On June 1, we reported that Xiaomi Mi5 is expected to launch in November and will feature a 5.3-inch screen with 2K resolution, Snapdragon 820 chipset, 4GB of RAM, 16/64GB storage, 16MP primary camera, a 6MP front-facing camera, fingerprint scanner, and a 3,030mAh battery. 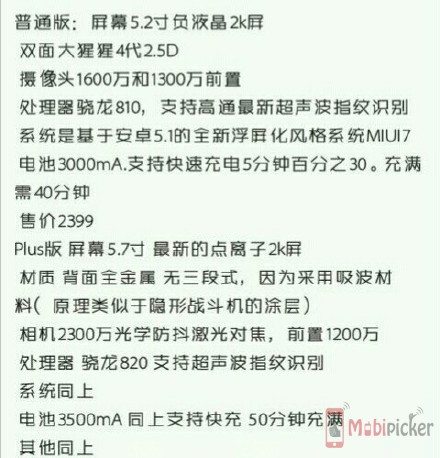 Today, we have found another set of specifications in respect of Xiaomi Mi5 and Mi5 Plus, leaked by @kjuma, a Weibo user.  According to the new leaked specifications,  Xiaomi Mi5 will come with a 5.2-inch 2K display with a Corning Gorilla Glass 4 protection on the front and flip side of the phone. The screen size leaked here is 0.1 inch less than what has been reported last week. There will be a 16 MP rear camera, a 13MP front camera, and a 3,000mAh battery. The battery will be featuring a fast charging technology that could charge upto 30% in mere 5 minutes and full recharge in just 40 minutes which seems to be quite impressive.

Running MIUI 7 based on Android 5.1, it will be powered by a Snapdragon 810 chipset, and will support Qualcomm SenseID ultrasonic fingerprint recognition technology.

The Xiaomi Mi5 Plus is the larger variant, which comes with a 5.7 inch display with 2K resolution, and is powered by a 64-bit quad-core Snapdragon 820 processor. It is said to feature a 23 megapixel rear snapper with OIS and a 12 megapixel selfie shooter. Supporting quick-charge, there will be a 3,500mAh battery which promises to deliver 100% of juice in just 50 minutes of charge. Similar to Mi5, it will also support Qualcomm SenseID ultrasonic fingerprint recognition technology.

According to kjuma, the Xiaomi Mi5 will be priced at 2399 yuan ($386), but no price details mentioned for the Plus variant. Now as we have two sets of specifications leaks we need to take these with pinch of salt and should wait for official confirmation from Xiaomi itself.