Yesterday, Xiaomi launched its Mi Note 2 smartphone at an event in China. The company also announced a concept smartphone with a borderless display, called the Xiaomi Mi MIX. However, the futuristic smartphone is actually available on sale.

The Xiaomi Mi MIX sports a custom-made 6.4-inch display with 2040 x 1080 pixel resolution and a 17:9 aspect ratio. The display makes up for 91.3% of the front. The almost borderless smartphone has extremely thin bezels on the top and sides. The only significant bezel is at the bottom, which houses the front camera and a speaker.

The Mi MIX is entirely designed with ceramic including ceramic back, ceramic frame, and ceramic buttons. It uses a mortise and tenon joints for attaching the display to the body, instead of glue or other adhesives. The new smartphone does not have physical buttons at the bottom. In fact, it is the first Xiaomi smartphone with on-screen controls. Unlike most smartphones, you still get the 16:9 area for content with the on-screen buttons, thanks to the 17:9 aspect ratio. Even the earpiece and proximity sensor are completely hidden, the Mi MIX uses a piezoelectric ceramic driver for the earpiece and an ultrasonic proximity sensor, which works through the display. The industrial design has been done by designer Philippe Starck. 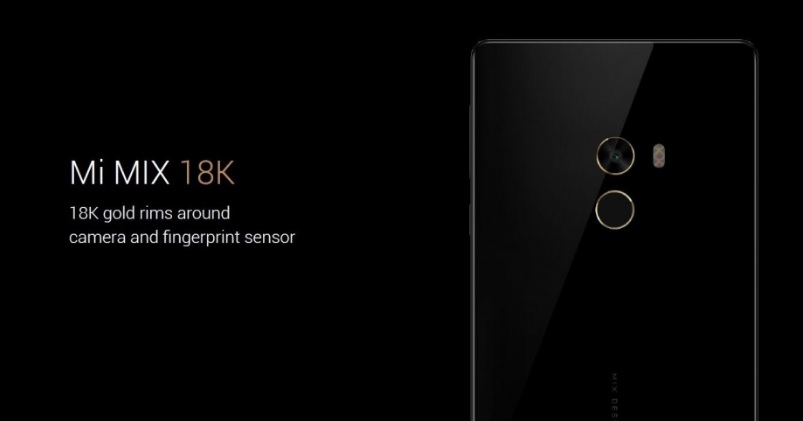 As far as specifications are concerned, the Mi MIX is powered by a Qualcomm Snapdragon 821 processor. It comes in two variants – a 4GB RAM with 128GB internal storage and a 6GB RAM with 256GB internal storage. The 6GB RAM variant features Gold trim, with 18K gold accents on the camera lens and fingerprint sensor on the back. It comes with a 16-megapixel rear camera with PDAF and 4K video recording capability. The concept smartphone comes with 5-megapixel front camera. The dual SIM smartphone is backed by a 4,400mAh battery with Qualcomm Quick Charge 3.0 fast charging.

If you are in India, sadly, the phone will not be released in the country, not anytime soon, at least. According to Gadgets360, Xiaomi has confirmed that it has no plans to launch Mi Note 2 and Mi Mix in India. In case, Xiaomi changes its mood in the future, don’t expect the devices any time before Q1 2017.