Xiaomi Mi MIX surprised users with its minimalist design. The concept smartphone comes with a ceramic build and a huge 6.4-inch screen that takes up 91.3% of the front of the phone. However, it doesn’t look like the Mi MIX can take a hit or withstand a sudden fall. An image of a broken device has surfaced online. 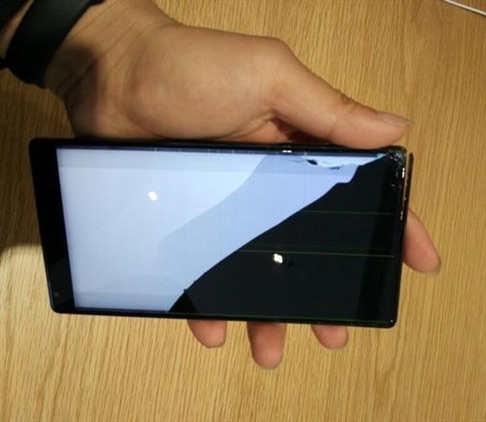 While achieving 91.3% screen-to-body ratio is amazing, the border-less design also makes the new Xiaomi marvel very fragile. An image of a broken Mi Mix has appeared online, before the sales begun. Apparently, the smartphone accidentally slipped from the someone’s hand at Xiaomi’s store in Hangzhou, leading to the disaster seen above. The damage was endured by both the broken screen and the crumpled ceramic frame.

As seen in the image, the most damage has been taken by the upper left corner of the body, which means the phone hit the ground diagonally, with upper left corner first. The two elongated cracks along the screen are clearly visible in the picture. It’s worth noting that the Mi MIX doesn’t come with any protection such as a Corning Gorilla Glass.

The Xiaomi Mi MIX sports a custom-made 6.4-inch display with 2040 x 1080 pixel resolution and a 17:9 aspect ratio. The almost border-less smartphone is entirely designed with ceramic including ceramic back, ceramic frame, and ceramic buttons. It uses a mortise and tenon joints for attaching the display to the body, instead of glue or other adhesives. The new smartphone uses a piezoelectric ceramic driver for the earpiece and an ultrasonic proximity sensor, which works through the display. The industrial design has been done by designer Philippe Starck.