Xiaomi Mi Max that was unveiled in May 2016 is a huge phablet with a 6.4-inch display. The key specs of its alleged successor, Xiaomi Mi Max 2  have appeared on GFXBench benchmarking site. The rumored phablet is listed as “Xiaomi Oxygen” on GFXBench.

Even though the official name of the MI Max’s successor is not known, the rumor mill is calling it as Xiaomi Mi Max 2.  According to the listing of Xiaomi Oxygen on GFXBench, the smartphone features a 6.4-inch full HD screen that will be delivering a full HD resolution of 1,920 x 1,080 pixels. The processing power for the device will come from 2.2 GHz octa-core processor along with Adreno 506 graphics.  This indicates that the phone will be driven by the unannounced Snapdragon 660. As of this writing, Qualcomm has not officially unveiled the Snapdragon 660. 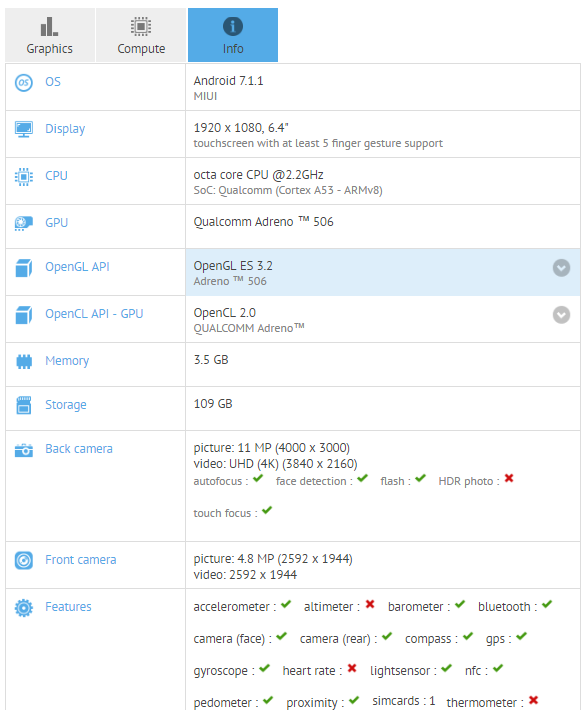 The Snapdragon 660 SoC will be coupled with 4 GB of RAM. Previous rumors have revealed that the Xiaomi’s phablet would be featuring 6 GB of RAM. Hence, there is a possibility that the phablet would be coming two RAM variants. The native storage of the device is mentioned as 128 GB and it runs on Android 7.1.1. Nougat OS skinned with MIUI software.

The Mi Max 2 has a 12-megapixel rear camera that will be coupled with LED flash. It will be able to support 4K video shooting at 3,840 x 2,160 pixels resolution. For shooting selfies, it will be coming with a 5-megapixel snapper. Other features revealed GFXBench listing includes NFC, Wi-Fi, Bluetooth, and more. There is no information available on the battery of Xiaomi Mi Max 2. The predecessor model has a 4,850 mAh battery. Previous rumors of Mi Max 2 have claimed that the device will be packed with a 5,000 mAh battery.

The Chinese company will be unveiling the much awaited Xiaomi Mi 6 and Xiaomi Mi 6 Plus flagship smartphones at the end of the month. Hence, there is less chance that the company would be unveiling the Mi Max 2 in this month. Since the original Mi Max was launched in May 2016, speculations are rife that its successor would be launching next month.