Putting the rumor mill to rest, Xiaomi has confirmed the launch date for Xiaomi Mi 6. The announcement for the next Mi generation device will happen on April 19 i.e. less than a week from now. If that wasn’t enough to get the curiosity on an all-time high, the Chinese manufacturer is tipped to announce the much anticipated Mi Max 2 alongside the flagship offering. 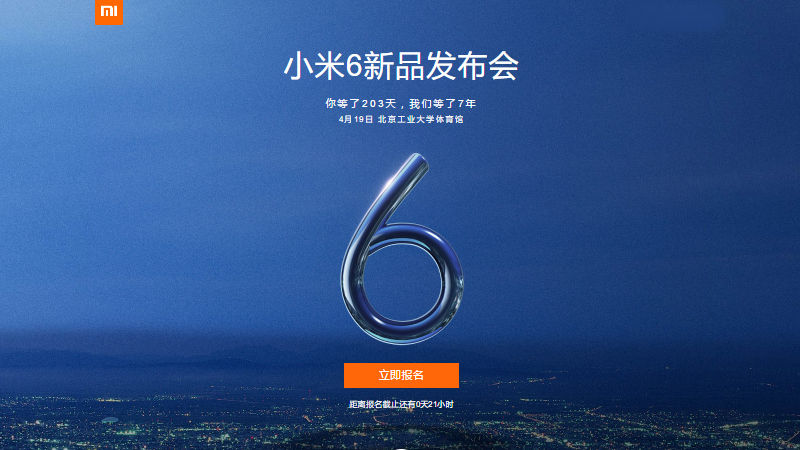 The date confirmation came in the form of a teaser image released by Xiaomi doesn’t say much about the upcoming flagship but builds up the hype around it. The teased image carries the tagline (translated), “You waited for 203 days, we waited for seven years.” However, the entire focus seems to be on the Mi 6, with no mention of Mi Max 2.

Still, the Mi Max 2 was tipped for an April 19 launch a few days ago on Weibo. In fact, the device has been spotted on GeekBench and GFXBench website under the moniker Xiaomi Oxygen.

The next generation Mi flagship is rumored to carry the same display with the latest Qualcomm Snapdragon 835 SoC in different RAM and storage configurations. There will be definite improvements to the camera, however, the pixel count shall remain the same. Xiaomi might announce a Plus variant too, but there are no concrete details on the subject. As far as the pricing is concerned, Mi 6 will cost around CNY 2,599 (roughly Rs. 24,300).

All these details are based on preliminary leaks and rumors so final product might vary.

Do let us know your take on the leaked specifications in the comments section below.