Xiaomi is getting ready to unveil its next flagship smartphone. The China-based company is now sending media invites for the launch of its upcoming device Xiaomi Mi 5s.

The previous version of Xiaomi was announced during the Mobile World Congress 2016 event held in Barcelona on February this year. Xiaomi Mi 5s is said to be an enhanced version of the regular Mi 5. as it is expected to come with Snapdragon 821 chipset and 6 GB of RAM. 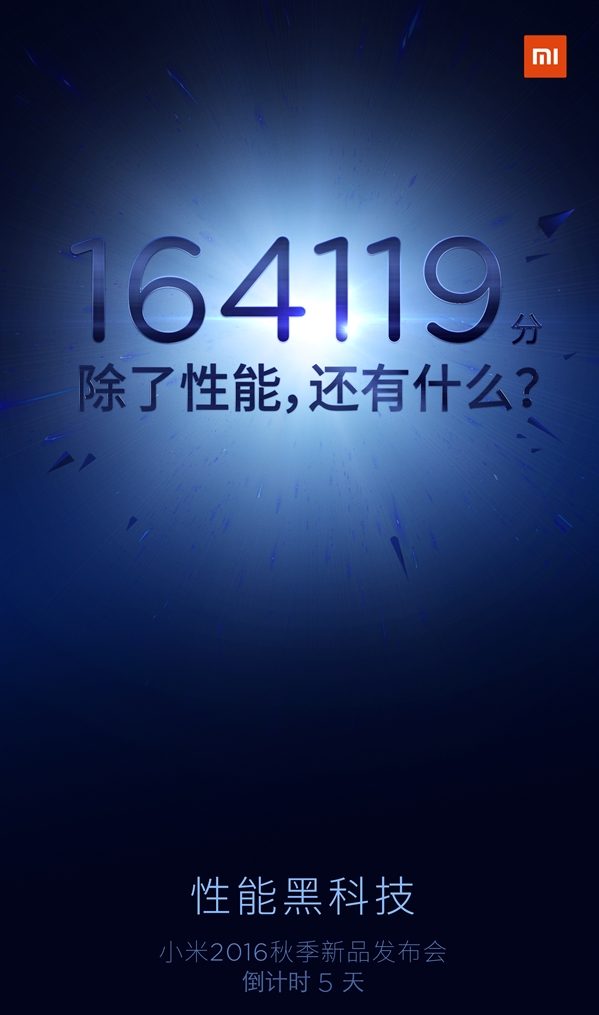 Xiaomi has released a new teaser that shows a high score of 164,119 on AnTuTu test that it carried out. It indicates that the company would be announcing Xiaomi Mi 5s flagship smartphone on Sept. 27 even though it has not confirmed the name of the device, Playful Droid reported.

It is not yet known when the Mi 5s, will hit the Indian markets. It is rumored to cost more than Rs 25,000 as the Mi 5 is currently costing Rs 23,999, IndiaToday reported.

The Xiaomi Mi 5s will come with 5.15-inch pressure sensitive screen to support 3D Touch like feature present on recent iPhones. It will support full HD resolution of 1080 x 1920 pixels. The device will be loaded with Android 6.0.1 Marshmallow out of box, customized with MIUI 8 user interface.

According to recent rumors, the smartphone will include Qualcomm’s Sense ID (ultrasonic fingerprint scanner). In the leaked image of Mi 5s, the home key is placed below display. The physical home button is absent in this device as the fingerprint sensor is placed underneath the glass below the display.

It will be powered by 2.15 GHz quad-core processor and Adreno 530 graphics of Qualcomm’s Snapdragon 821 chipset. The device will have 6 GB of RAM, GSMArena reported.

The smartphone will be packed with 3490 mAh battery that will support Qualcomm’s Quick Charge 3.0 feature.The connectivity options will include USB Type-C port, GPS, NFC, Bluetooth and Wi-Fi.