It seems Xiaomi is preparing to give us a pleasant surprise by the end of this month. The company has just released a poster for its upcoming Beijing conference which is scheduled to start on Feb 28. 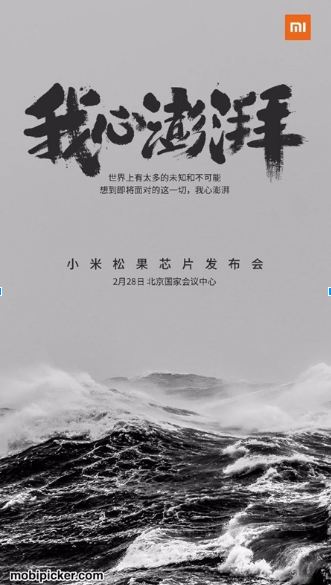 Yesterday we talked about the new benchmarks of the Xiaomi Mi 5C, the Chinese firm’s forthcoming mid-ranger. While the reported specs of the yet-to-launch handset are probably spot on, the widely speculated MWC 17 release date probably is not.

The Mi 5C is likely to come with an eight-core processor with A53 architecture design — presumably, it’s going to be Xiaomi’s homegrown chip which will be slightly more powerful than the Qualcomm SnapDragon 625.

It is possible that Xiaomi will use the Beijing conference to introduce the new processor. However, according to Industry analyst Kevin King (@Kevin king diary) [via mydrivers], Xiaomi will also be rolling out the Xiaomi Mi 5C on the same day — although it is possible that they may choose to name the device with another moniker.

Leaked benchmarks have shown that the Xiaomi Mi 5C specs will include an octa-core processor clocked at 1.4 GHz, 3GB or RAM, expandable storage, as well as Android 7.1.1 Nougat.