Xiaomi Mi 4 is a great budget flagship smartphone. However, questions were thrown at Xiaomi for not including NFC connectivity in the phone. The answer to these questions was provided by Xiaomi CEO Lei Jun, who said that according to the statistics, only 1% of Xiaomi Mi 2A and Xiaomi Mi 3 users utilised the NFC connectivity of their phones.

However, it looks like Xiaomi wants to reconsider its decision this time. China UnionPay has released a document listing 32 phones that will be sporting its mobile payment service called “Cloud Lightening Pay” (translated). This service requires those phones to get NFC connectivity. And as you might guess, the Xiaomi Mi 5 is on the list too. This means that the Mi 5 will indeed feature NFC connectivity, which is a needed thing on a flagship. 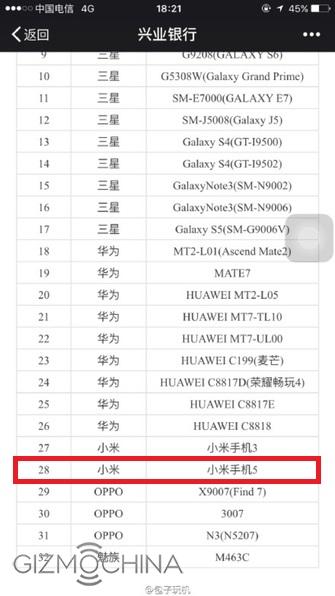 For those who don’t know, China UnionPay is the only financial institution in China that handles interbank payments. And the new Cloud Lightening Pay is directly placed against Apple Pay, which is why Apple’s mobile payment service hasn’t been launch in the country yet.

Apart from the NFC support, we are also expecting the Xiaomi Mi 5 to get a fingerprint scanner inside its home button.