As reported yesterday, Xiaomi had released a new teaser image announcing an Mi event to be held on October 19th, where the OEM will be launching a “Next Generation” device. The common belief in the industry is that the event would be witnessing the launch of the Xiaomi Mi 5, but latest developments suggest that the company will not be launching the Mi 5 nor the Mi Note 2. 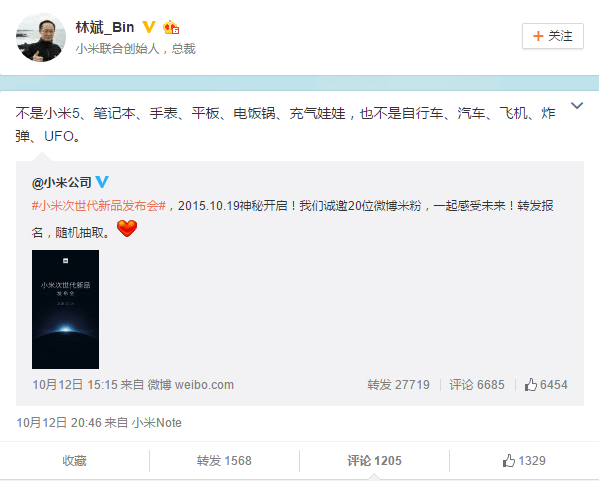 Lei Jun, Xiaomi founder, posted on Weibo that the Next Generation of technology and science hasn’t been used much in the smartphone industry, like the next generation consoles, games, processors, etc. Does this indirectly mean that Xiaomi will be launching some Mi-series of video game products? Well, its not impossible.

Meanwhile, Lin Bin, Co-Founder at Xiaomi, has denied all the microblogging rumors about Xiaomi coming up with Mi 5, Mi Note 2, notebooks, watches, flat panels, laptops, etc. This again hints at the possibility that Xiaomi might launch some gaming products at the “Next Generation” event on October 19th. We’ll find out and let you know, so stay tuned.