MobiPicker
News Xiaomi Mi 4i Limited Edition Launched in India; Sale starts on August...
Share on Facebook
Tweet on Twitter
Deal Alert: 49% Off on ExpressVPN
Touted as #1 VPN in the world, ExpressVPN is now offering 49% off & an additional 3-months of service on its annual plans.

In the on-going MIUI 7 world-wide start premier in New Delhi, Xiaomi has declared the Mi 4i Limited Edition that will come in Pink, Blue and Yellow colour variations.  Priced at Rs 12,999, the phone will go on sale on August 25th at 2PM via company’s official site (mi.com). The standard Mi4i variant is available with 32GB of storage, while the limited edition is restricted to 16GB memory. 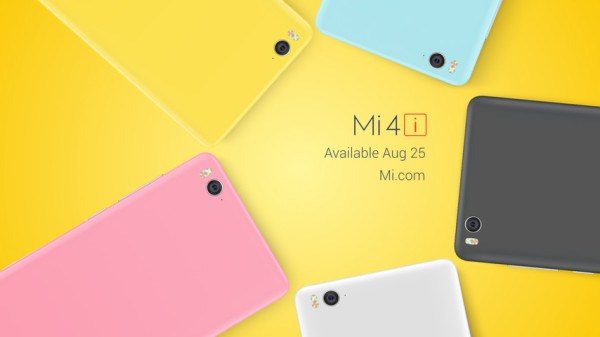 In terms of specification, the Xiaomi Mi 4i boasts 5-inch Full HD display, with 441ppi density. Measuring 7.8mm thin, it comes with a 3,120mAh battery, which gives the juice for 1.5 days of moderate use. The phone is powered by a Snapdragon 615 SoC, paired with 2 gig of RAM. Currently, the device is running MIUI 6, however it should get an update to MIUI 7 soon.

In the camera department, the Mi 4i features a 13 megapixel main camera with dual-tone dual LED flash, along with a 5 megapixel front-facing camera for selfies and video calling.