MobiPicker
News Xiaomi launches Mi 4i Dark Grey variant in India; priced at INR...
Share on Facebook
Tweet on Twitter
Deal Alert: 49% Off on ExpressVPN
Touted as #1 VPN in the world, ExpressVPN is now offering 49% off & an additional 3-months of service on its annual plans.

Xiaomi has launched the Mi 4i dark grey variant in India, which will be available for purchase starting June 16 through flash sale. The registrations for sale are now open and will be closing on June 15 at 2PM IST. The Mi 4i dark grey version is priced at INR 12,999, same as the currently available White variant is priced. 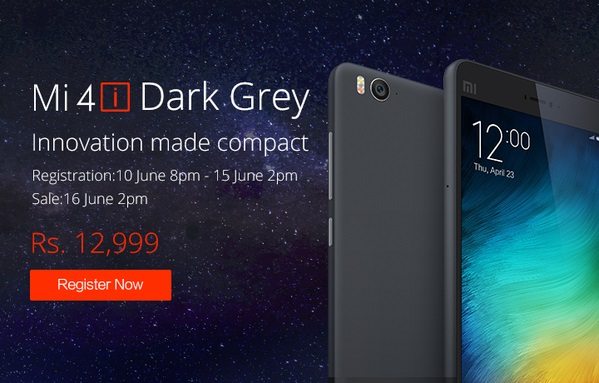 There is nothing different, apart from the colour change. It is equipped with a 5 inch 1080p IPS OGS display, and is powered by a 64-bit 2nd gen Snapdragon 615 chipset with an octa-core processor. Running Android Lollipop-based MIUI6, it packs 2GB of RAM, 16GB native storage, a 13 megapixel primary camera, a 5 megapixel selfie camera, and a 3,120mAh battery.

In terms of connectivity, the Mi 4i is blessed with LTE, Bluetooth 4.1, GPS, and Wi-Fi a/b/g/n/ac connectivity.

If you are still looking for the white variant, the next flash sale is scheduled for tomorrow 2PM and registrations are closing today mid-night.

Previously, the Xiaomi Mi 4i was reported to have heating problems, which was finally addressed with the software update version 6.5.5.0.