The Chinese manufacturer Xiaomi is said to launch a curved smartphone very soon.  However this curve device is surely not the next flagship from the company and we have to wait for another flagship from Xiaomi till the last quarter of the year. Dubbed Mi5, the smartphone is expected to be launched in coming months but it is expected to land on the market shelves not before October. 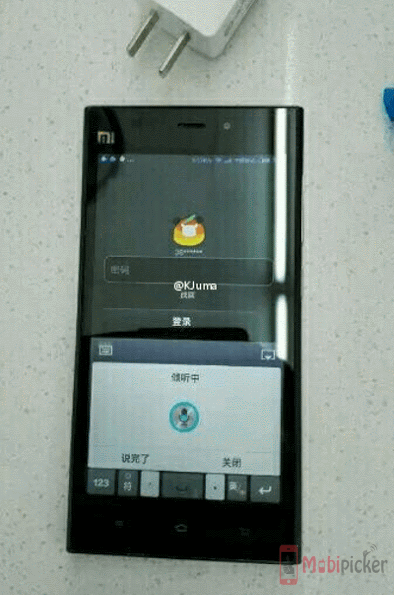 A new image showing the alleged Xiaomi Mi5 has leaked online directly from China by a weibo user @KJuma. The picture in talk has not been clicked in good lighting condition so the legitimacy of the picture is not confirmed and we have to take it with a pinch of salt.

The mystery device in leaked image is codenamed as Xiaomi Arch and it is giving a look of a curved display feature, as comparable to Samsung Galaxy S6 edge. There is no confirmation on this whether the image is actually of Xiaomi Mi5 or a totally new device.

Images which were leaked earlier this week donot have any resemblance to this image so there are more chances that the device in display named as Xiaomi Arch is a different from Xiaomi Mi5. The Xiaomi Mi5 gives the impression of an edge-to-edge display and the curvaceous screen.

We have to hold the breath for some more time, till the haze around the looks of Xiaomi Mi5 is not cleared by the manufacturer itself. Till then keep visting MobiPicker.