It still probably has a glitch with the number of games completed because it’s still showing one big zero (hard to believe that this could be possible) but other stuff works just fine. Players completed a total of 6,266,392 missions and 24% of them are flawless. Nice feat if we count in the sky-high difficulty of the latest XCOM entry. Only 26% percent players play the game on rookie difficulty while the majority is sticking to Veteran (normal) difficulty level. There are just 11% of players playing it on Commander (hard) and a statistically invisible two percent of players that probably have masochistic desires and play the game on the legend difficulty. 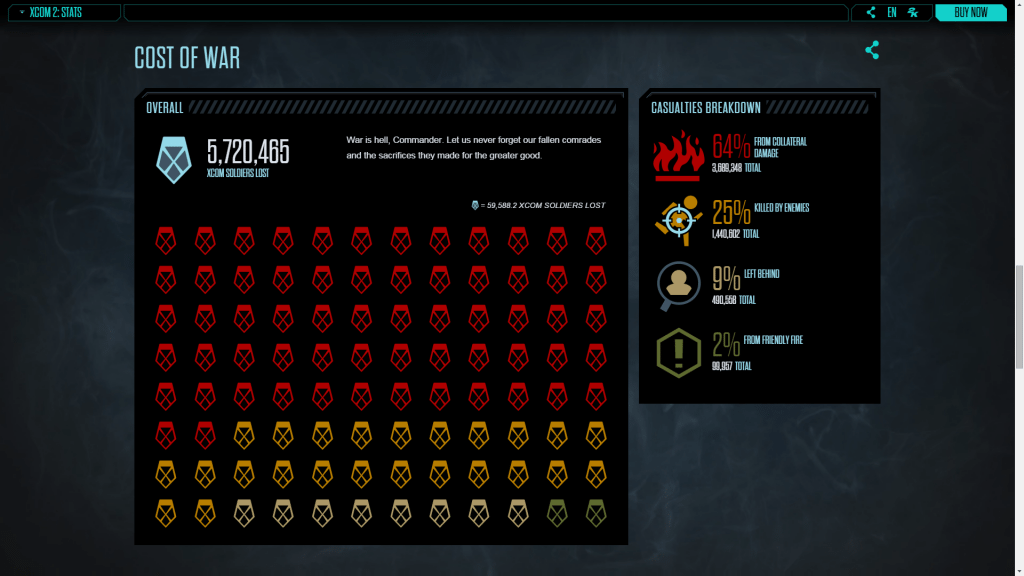 There are more than 75 million killed aliens, most of them being troopers (duh!) followed by sectoids (they can be a real pain in the early stages) and stun lancers. These statistics are to be expected, troopers are easiest to kill, sectoids should be first targets to deal with and stun lancers are a kamikaze style of soldiers, they love to run straight at you and get easily killed if you are a sane person and always use overwatch.

Top class are rangers, they hold 26% of the total kill count, followed by Sharpshooters with 23% of total kills. There are more than 5.7 million soldiers lost, most of them being victims of “collateral damage” (a whopping 64%), followed by death by the hands of enemies (25%). It is worth mentioning that 2% of soldiers died from friendly fire (be more responsible, people). Troopers are the ultimate killing machine in the game; they killed 45% of soldiers, followed by officers with 21% of all kills. I’m guessing that players are leaving troopers for later, concentrating their efforts on more powerful enemies just to end up being killed by weakest enemies available.

A really nice page, with plenty of stats for every XCOM fanatic.