If you own an Xbox console, you’re in for a treat next month as Microsoft has put down some really heavy-hitters in their Games With Gold promotion. The four games in the picture below will be available to you entirely free if you’re a subscriber to Xbox Live. 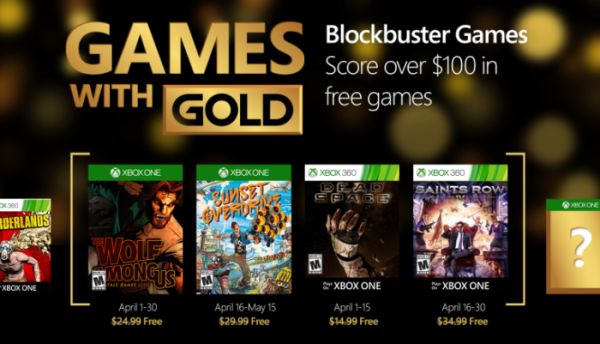 The Wolf Among Us will be available all month in April, and is a noir crime mystery that involves characters from the Fables comic book series – long story short, fairy tale characters disguising themselves in a contemporary New York City.

Sunset Overdrive involves a lot of high-flying shooting and take a look at the colours in game – it’s so colourful! It will be available from April 16th to May 15th.

Dead Space is a classic survival horror game in which Isaac Clarke, an engineer is stuck on a space ship crawling with horrific mutated aliens out to kill him. It will be available from April 1st to April 15th.

Finally, Saints Row IV, possibly the greatest game of 2013, involves the president of the USA (that’s you) fighting off an alien invasion in a vast open world. Also, it has Keith David. It will be available in the latter half of the month, from April 16th to April 30th.

Which game are you most excited for? Let us know in the comments below.