In a matter of days, March will be over and Xbox gamers will again be waiting for next month’s Xbox Games with Gold free games. While there are still many more days to go, it seems that someone got a little too excited. 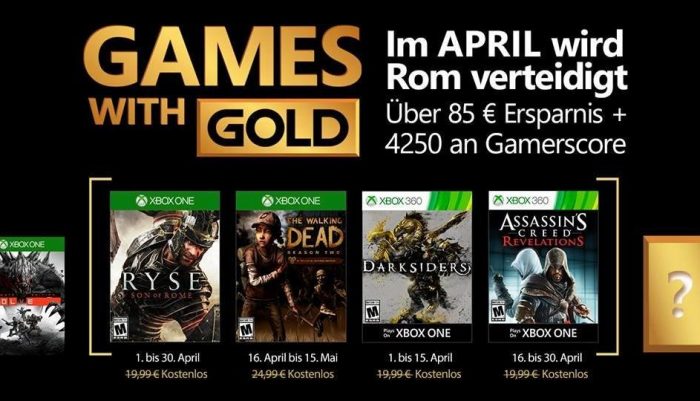 According to Xbox Achievements, April’s Xbox Games with Gold lineup contains games that many subscribers will find really exciting. As per usual, the roster will include two games for the Xbox 360, both having backwards compatibility and are playable on the Xbox One. Meanwhile, the remaining two will be just for the Xbox One.

For the Xbox One, Ryse: Son of Rome is our first game. This third-person hack-and-slash game was released back in 2013. Players will assume the role of Marius Titus, a Roman general in the quest to avenge his slain family. Ryse: Son of Rome will be available for download for the whole month of April.

Next in line for the Xbox One is Telltale’s The Walking Dead Season 2. As the title implies, this game picks up on where the season 1 left off. And as before, the game also follows the adventures of Clementine in the post-apocalyptic time where the world is littered with walkers or zombies. This game can be downloaded for free starting April 16 until May 15.

It seems like the month of April will be a pretty exciting one for Xbox gamers. The titles, to say the least, are top-draw and pretty engaging.

Are you excited for next month’s Xbox Games with Gold lineup? Be sure to let us know in the comments section below.