WWE 2K17 fans are probably well aware of the issues being faced when downloading and unlocking Goldberg. While the pre-order bonus promised Goldberg character, several gamers found out that Goldberg character was missing from the game. And the trouble continues for WWE 2K17 developers with latest reports hinting at a possible PS 4 bug, where activating the sleep mode while on the main menu of WWE 2K17 erases all saved data of the game. This is a serious bug, because it’s virtually equivalent to a hard reset of the console. WWE 2K17 developers are yet to comment on this issue. 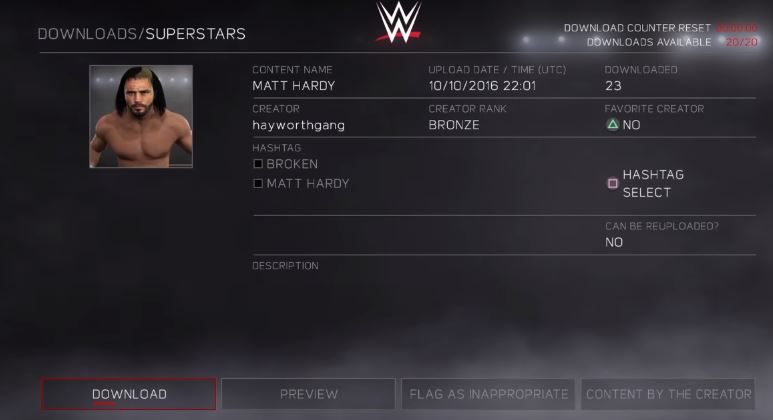 Meanwhile, you can check out our post on how to unlock the all-power Goldberg and continue to read on to find out how to download and unlock yet another popular character – the Broken Matt Hardy.

Several characters unlocks have already been tipped by gamers. A recent tip by Macho T showed how to unlock secret trophies by completing the Big E’s Giant Spear finishing move. Now another gaming tipster has detailed the steps to download and unlock broken Matt Hardy. PS4 owners can follow these steps –

1. Head to Community and Creations from WWE 2K17 main menu.

2. Select Downloads. Search for Matt Hardy character. You should be able to see Matt Hardy in the list of superstars that you can download.

There are a couple of things you need to be aware of. The download lists hayworthgang as the creator of the broken Matt Hardy mod. As you download, Matt Hardy should fit it one of the 100 download slots. When you see Matt Hardy fitting into one of these, you can be sure that the download is proper and working.

Have you been able to unlock Matt Hardy and Goldberg without any issues? Or are you having a tough time downloading Goldberg and Matt Hardy characters? Do let us know your experiences in the comments section. Meanwhile, watch this video which shows how to unlock broken Matt Hardy –