The latest fiscal quarter saw a very significant drop in Windows Phone revenues, which was enough for people to start guessing that the platform was going to die soon. However, some new statistics suggest that things are still positive for the Microsoft mobile OS. Data released by comScore gives us the January 2016 market share figures, and comparing it with the October 2015 figures, it comes to light that the number of smartphone subscribers using Windows Phone remains the same very close to 3%. 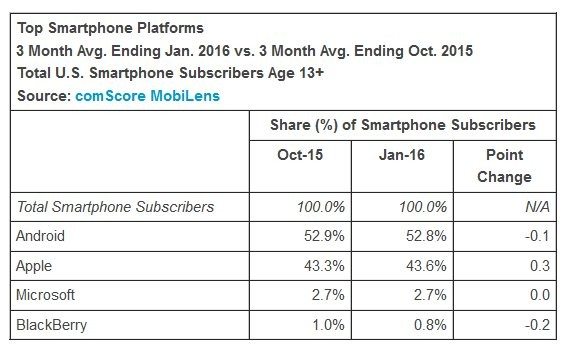 As of now, the market share of Windows Phone in the US is currently at 2.7%, and this was the same in October 2015. iOS and Android displayed similar performance, with the former growing by 0.3% to 43.6% and the latter coming down by 0.1% to 52.8%. However, the bit that’s worrying the market share of Windows Phone is that a lot of popular smartphone apps are still not available for the OS, which is a big turn off for potential buyers.

comScore said that YouTube, Facebook, Facebook Messenger, and a lot of other Google apps top the list in the US, yet many of these apps are not officially available on Windows Phone. It is possible that many of those apps might not reach the OS at all, as Google has already made it clear that it has no intention of creating Windows Phone versions of its popular apps. We were initially of the impression that the arrival of Windows 10 Mobile might change Google’s decisions, but nothing seems to be changing.

Let’s see whether Windows 10 Mobile is able to keep the OS from going extinct.