The good news for Microsoft is that Windows 10 is growing in popularity, and has about 14.9% of users since it was released last year. The bad news for them is that Windows 7 still has at least three times the number of users and is dominating the market as the most used operating system in the world. 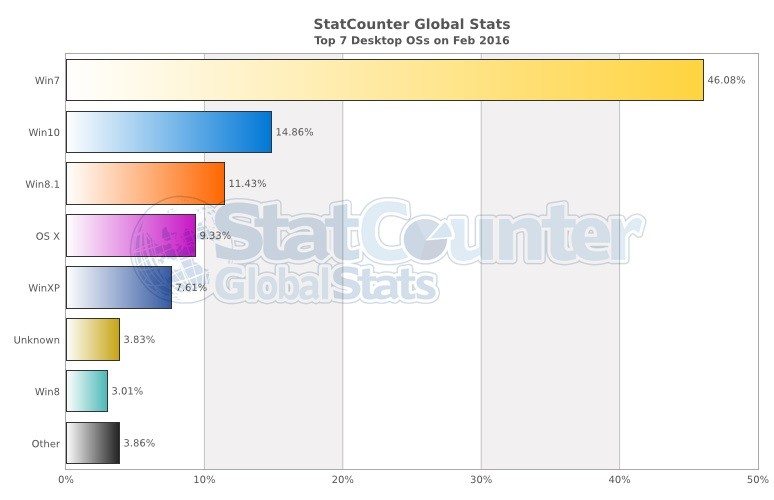 Microsoft has, seemingly, left no stone unturned to ensure that its entire user base moves to Windows 10 as soon as possible – it has even offered Windows 10 as a free upgrade to anyone who uses a previous windows version on their computer. This has convinced most of the Windows XP users to move to Windows 10, and XP now makes up only 7.6% of the net users in the world. However, this is majorly due to the fact that Microsoft has stopped providing support for Windows XP, something that 7 users still continue to receive.

The number of Windows 8 and 8.1 users is also going down, although Windows 8.1 still makes up about 11.5% of the net user base of Windows. Windows 8 has been practically wiped out, taking up just 3% of the user base, because of its well established unpopularity among the Windows users worldwide.

Microsoft is planning to have one billion computers running Windows 10 by 2016, and we are not sure what they will do to further facilitate the transition of the OS to Windows 10, given that the free upgrade campaign that Windows is providing to its users is set to expire this July. Whatever happens, the way Microsoft handles this is going to be interesting.