MobiPicker
News Windows 10 Universal App For Bank Of America Set To Release On...
Share on Facebook
Tweet on Twitter
Deal Alert: 49% Off on ExpressVPN
Touted as #1 VPN in the world, ExpressVPN is now offering 49% off & an additional 3-months of service on its annual plans.

There have been quite a few rumors regarding the return of Bank of America official app to Windows store, and today we have a confirmation on the release date for the same.

The guys at Windows Central received an image of internal Bank of America website revealing the 28th March as the slated date for Windows 10 and Windows 10 Mobile. Other best part is that it will be a UWP(Universal Windows Platform) app, meaning it will work on PCs, laptops, tablets and phones running the Windows 10 OS. 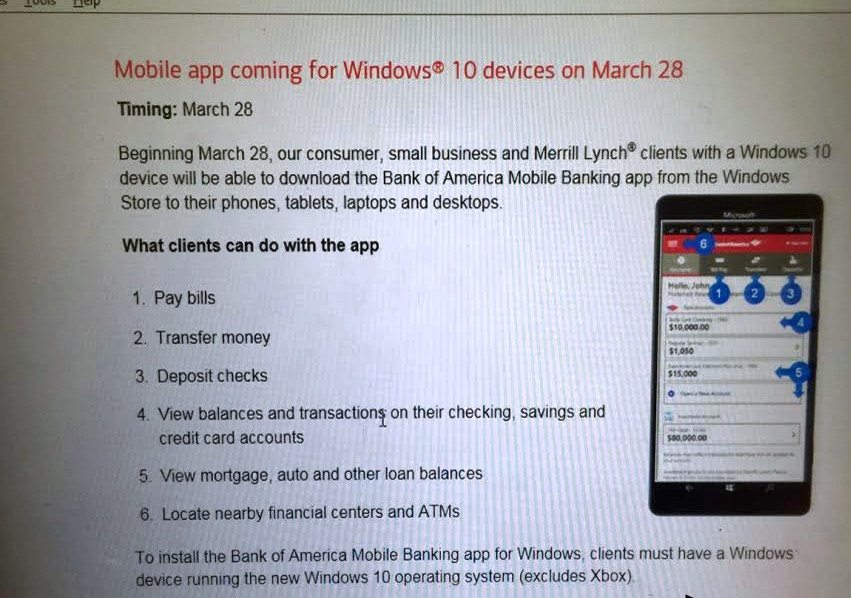 View Balance and Transactions on Savings and Credit Card Accounts

View Mortgage, auto and other loans

Locate nearby ATMs and financial centers

It’s good to see Bank of America following the likes of American Express as being some of the first US banks to embrace the Windows 10 platform.

Earlier, Bank of America has withdrawn its support from Windows Phone 8.1 platform causing a bit of havoc for the platform supporters. But, it’s great that the banking institute is coming back with added features like cheque deposit.

We shall have more info on the app come Microsoft Build conference, as the slated 28th March release date is just days after it.