Microsoft started rolling out Windows 10 Build 14361 for both PC and Mobile insiders on the fast ring a few hours ago. The new Windows 10 PC Build 14361 accompanies some new features and improvements, which can be found here. 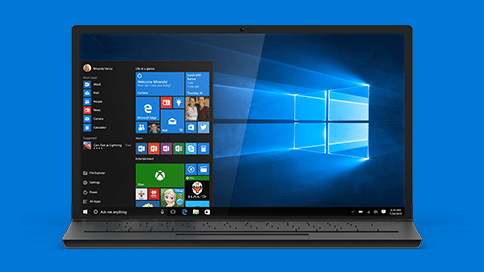 We fixed the issue causing keyboard navigation in Store apps like Netflix or Tweetium to not work.

We fixed the issue causing certain websites like YouTube to fail to render in Microsoft Edge or IE due to a recently implemented feature called TCP Fast Open.

We fixed an issue resulting in a strange grey bar frequently being seen on the left side of the Microsoft Edge browser window (for example, after invoking a context menu).

The window of active hours for when you are using your PC has been increased from 10 to 12 hours under Settings > Update & security > Windows Update and “Change active hours”.

We have updated the download notification in Microsoft Edge to include filename, download status, and site domain on separate lines.

Fixed an issue that would cause the icons to disappear from the tabs in Microsoft Edge after the DPI change corresponding with remotely connecting to the PC via Remote Desktop.

We fixed an issue where DNG file thumbnails were not displaying in File Explorer.

We polished the appearance of Start by reducing the amount of whitespace at the top of Start, and adding logic so that the scrollbars will immediately hide once your mouse is no longer hovering over that area. We also fixed an issue resulting in clipping on the bottom or side of Start’s context menus.

We fixed an issue where pressing the Enter key would not submit the Wi-Fi password in the network flyout from the taskbar.

We decreased the size of icons used in notifications from 64×64 to 48×48 – maintaining the visibility, while improving the use of space in the Action Center.

We have improved the reliability of Cortana’s listening after tapping the mic button and fixed an issue that resulted in focus being lost to Cortana’s search box after a typed search has been deleted via backspace.

We have updated Windows Defender to not show recap notifications in normal mode if no scans have been run, or in scan-only mode if no threads have been found.

We fixed an issue that resulted in certain apps, such as Photos, not being able to set the desktop background.

Going forward from Build 14361, your Task Manager settings will now be preserved across build updates.

We fixed an issue where Start wouldn’t dismiss after launching Sticky Notes, leading to Sticky Notes appearing behind Start.

We fixed an issue resulting in not being able to set your account picture in Settings using the camera option.

We have added a keyboard shortcut for opening the taskbar’s clock and calendar flyout – this shortcut is WIN + Alt + D.

We fixed an issue where the taskbar’s volume icon was showing incorrect states for 0% and muted.

We fixed an issue where applying a new save location on the Storage Settings page for any one file type would result in any other pending save location changes being lost.

And following is a list of known issues for Windows 10 PC Build 14361:

If you have a French Windows 10 Insider Preview build installed on your PC, you will not receive Build 14361. There is an issue with the French translation process in this build that would revert a lot of text that was used to be shown in French back to English. So we have chosen not to release this build to Insiders whose base build is French. If your base build is not French and you have a French Language Pack installed – you will still be able to install the new French language pack on top of this build, but this issue will also impact you.

Text prediction using the Japanese IME will freeze your PC. To avoid this issue and continue using the Japanese IME, we recommend turning off text prediction. You can do this by right-clicking IME mode icon “A” or “?” in systray and selecting “Properties”, clicking “Advanced”, and navigate to the “Predictive Input” tab and check off “Use predictive input system”. You can turn on prediction feature again by checking it on.

If you click on a file download link, it will open a tab and close it without doing anything in Microsoft Edge. The workaround is to go to the Download pane and start the download there by clicking “Save” or “Save As”.

For certain languages, such as Chinese or Portuguese (Brazil), you will not be able to launch Start while an app is installing.

In case you are on the fast ring of Windows Insider program, you can get the Windows 10 PC Build 14361 update by visiting the update section on your PC. Do share your feedback with fellow users on mobipicker in the comments section below for the new build.

NOTE: Insider builds are subject to bugs and issues so be careful before installing one on your Windows 10 hardware. Neither Mobipicker nor Microsoft takes the responsibility for a bricked device.