Microsoft’s arch enemies have always been spam and piracy. Keeping up with the almost traditionalised problem with the company’s software, Windows 10 Mobile OS has followed suit. Since the inception of the Windows Phone and its subsequent merger with Windows 8 and 8.1, people have noted time and again that fake applications are riddled in the company’s app marketplace Windows Store. Since Windows 10 came out in July last year, Microsoft has been promising that they will put an end to the problem, but then this happens: 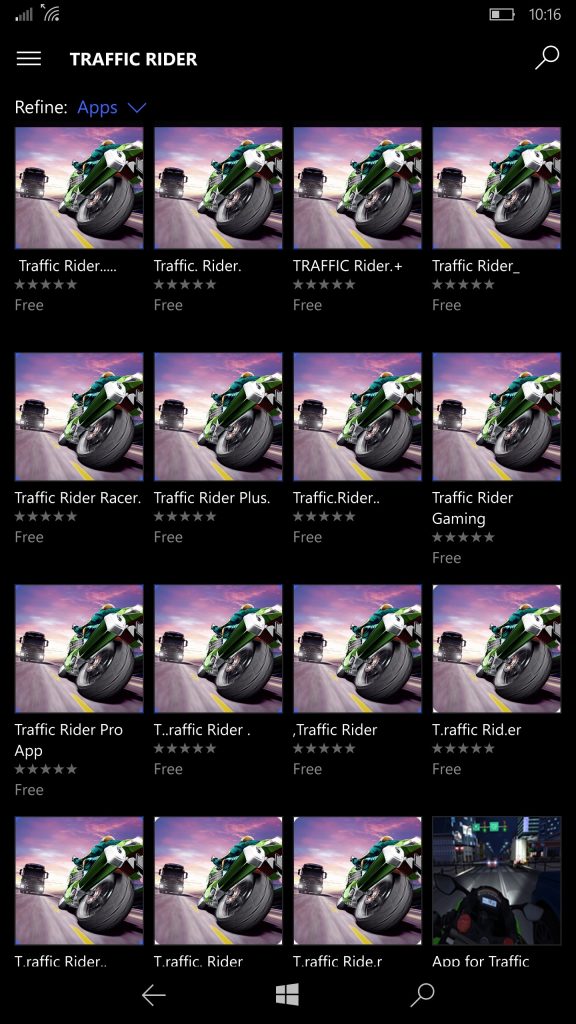 While the complaint among users of the lack of genuine apps in the marketplace is growing, there is no end to the number of fake apps you can find in the store. The major question in the minds of developers and even users is what the problem with Microsoft’s filters is that allows fake apps such as these to get through.

Competitors such as Apple’s Store or Google’s Play Store never face problems such as these, so it’s clearly not impossible to block spam apps and help users have a better experience. While Microsoft’s idea of merging their store with apps meant for the Android marketplace is a good idea, it will not get anywhere unless the lack of apps and the abundance of spam is dealt with severely. The company is working on it and is likely to remove the apps in the picture above (from a search of “Traffic Rider”) within a few hours or days, but more is bound to spring up. Strict action has to be taken by the company if it doesn’t want to lose its user base.