Not all games are meant to be played on ultra at 1440p with a single 1080. 1080 isn’t the king of all cards, and expecting all games to run at 1440p60 on max settings is quite unreasonable. At the moment, you should try to play Watch Dogs 2 at very high, probably tweak some settings here and there to get a stable 60. Not that you can because your PC will probably choke on itself trying to run this game on anything more than medium for 60 FPS.

Even more cringe-worthy, a LOT of people are actually okay with that and even defending Ubisoft. New GPUs have never been more overpowered for their respective resolutions and devs are capitalizing on that and just release crappy running games because they can more or less get away with it. The game is nowhere near beautiful enough to justify this kind of performance, there’s nothing revolutionary there, just another open world game like GTA V or Witcher 3 which run so much better.

There are plenty of other good looking games or even better-looking games that don’t need such huge GPU power and yet Ubisoft comes up with this. If a GTX 1080 struggles to handle 1080p, how on earth can a console run this game? We really think the console market is messing up with the gaming industry. Everything has to look good on all platforms even though on PC you have 3-5 times more powerful machines and yet here we are. The best of PC can`t handle a stupid game, like usual. At this point, we don`t see any sane person that would buy this game on PC.

So, this is basically another GTA V port where it’s pretty good by most standards but drops frames in specific places outside. That is likely due to shadowing or grass. At the moment, it appears you will have to play Watch Dogs 2 at lower settings to get a decent framerate. 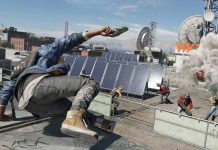