MobiPicker
Deals Walmart offering T-Mobile Microsoft Lumia 435 at just $49.88
Share on Facebook
Tweet on Twitter
Deal Alert: 49% Off on ExpressVPN
Touted as #1 VPN in the world, ExpressVPN is now offering 49% off & an additional 3-months of service on its annual plans.

The T-Mobile version of Microsoft’s budget smartphone Lumia 435 is now available on Walmart for mere $49.88. It is worth noting that the handset is listed for $70 on Microsoft official store in the US. 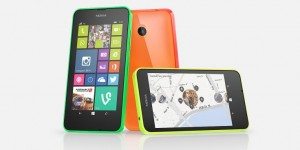 The Lumia 435 was unveiled back in January this year and features the specs at par with its price. Powered by a Snapdragon 200 chipset with dual-core 1.2GHz processor, the Lumia handset packs 1GB of RAM, 8GB of expandable storage, and a 1,560mAh battery.