Walking Dead is one series, that has everything, from zombies to ghosts, werewolves to other supernatural species, but there is one thing that is the best which makes the series look cooler and awesome the background score. A rarely talked about topic. The music of Walking Dead has been enthralling and captivating further elevating the intensity of the scenes.

The recent episode of Walking Dead featured songs of Daryl. In totality, there were two songs that were played. One of the songs were played multiple times during the episode, demanding attention to itself, and the another song was played at the end of the episode.

The song “Easy Street” composed by The Collapsable Hearts Club, was the one played over and over again. The song is sung by Petra Haden and Jim Bianco has written the song and leads the band which was released officially on November 15, 2016. The song can also be listened at the main website of Jim Bianco, here and is also available at Amazon. You can watch the video linked below:

The montage scene in the episode, at the beginning, featured a song, “A Town Called Malice.” composed and created by The Jams. You can listen to the song, linked below: 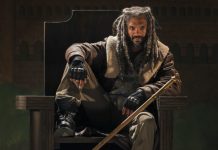 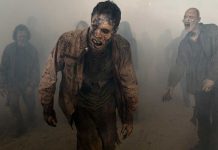