The popular ‘Vote to Play’ is back and voting will kick off officially on February 9.’ Vote to Play’ is a programme which allows players to vote their favourite game from a list of games and the game that garners the most votes will be added to the game lineup for PlayStation Plus members the following month (this time March).  The list of competing games are out and they are; Action Henk!, Assault Android Cactus and Broforce. Let’s analyse the games one after the other. 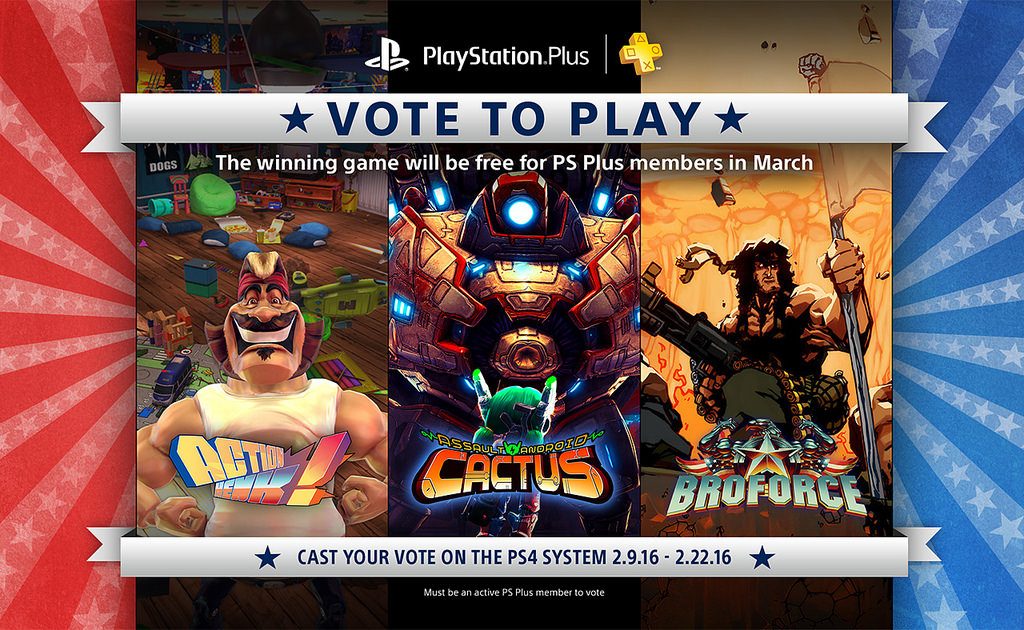 Action Henk! is a fast paced racer published by Curve Digital and developed by RageSquid.  The player can run, jump and butt-slide through a host of toy room environments with forgotten action figures. Speed and timing is crucial as you race against your opponents and previous scores.

A game developed by Witch Beam and Designed by Sanatana Mishra. The mechanics of the game allows for a twin stick shooter which breathes some sort of fresh air to the game. It has a Shareplay support which lets your friend join your game for up to one hour at a time. This phenomenon has been nicknamed ‘a virtual couch’ because it creates a co-op experience. The developer said he only made a game that would satisfy him and his team; guess more people got satisfied in the process.

Broforce was published by Devolver and developed by Free Lives.  It is a game that immortalises those action heroes of the 80s. It has an online co-op besides the awesome presentation. It sure deserves the encomium it has been getting.

The choice of titles is inspired from the idea of having PlayStation plus members connect in a co-op either with their friends or other plus members. A little knowledge on the game and its developer and publisher should help you decide on where to cast your vote.

From February 9, all PlayStation plus members can cast their votes by logging into their PS4 with their PSN account and accessing Vote to Play under dedicated PlayStation Plus section on top of the left corner of their PS4 home screen. You can also visit PlayStation stores or what’s new for more info.

Which game do you think deserves to win?