MobiPicker
Mobiles Android Vivo Y66 with 16 MP Front Camera Launched in India: Price, Specifications...
Share on Facebook
Tweet on Twitter
Deal Alert: 49% Off on ExpressVPN
Touted as #1 VPN in the world, ExpressVPN is now offering 49% off & an additional 3-months of service on its annual plans.

Vivo has just announced a new selfie-centric smartphone for the Indian audience, the Vivo Y66. The smartphone comes with a 16 MP front shooter accompanied by a LED flash, dubbed as ‘Moonlight Glow’ by the company. According to Vivo, the new ‘Moonlight Glow’ feature offers a natural glow on the face that lights up pictures irrespective of lighting conditions. 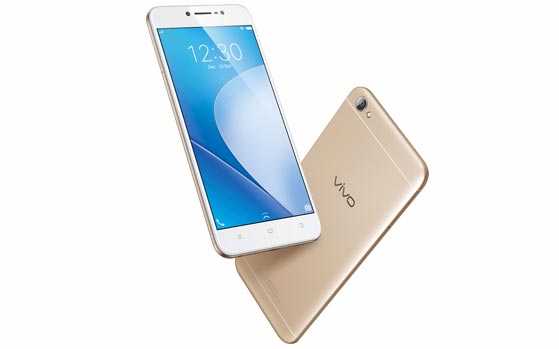 The latest Y66 offering from the Chinese manufacturer comes with 5.5-Inch HD display with 2.5D curved Gorilla Glass 3 screen on top. It is powered by an octa-core 64-bit processor and 3 Gigs of RAM. Internal storage of Vivo Y66 stands at 32 GB with expandable capabilities of up to 256 Gigabyte via micro-SD card.

Camera department, more so, the front one, is the highlight factor of the new device. Vivo Y66 comes with 16 MP front shooter with a LED flash and a 13 MP rear unit. It’s a dual-sim offering with Funtouch OS 3.0 running atop Android 6.0 Marshmallow. All this is powered by a 3000 mAh battery with QuickCharge 2.0 support. Vivo has also equipped the latest device with features like ‘Smart Screen-Split’ mode to make multi-tasking easy, an “Eye Protection Mode” which is basically a blue-light filter for the display. Users option for the Y66 will also get 6-month free subscription to Saavn Pro, offering unlimited downloads with no Ads.

As for the price is concerned, you will need to spend Rs. 14,990 to own a Vivo Y66 unit. It will be available in two color variants: Crown Gold and Rose Gold. Following is what the Vivo India CMO, Vivek Zhanh had to say:

“Y66 is a testimony to our commitment towards valued customers to constantly offer them varied choices. We are pleased to launch this device, a stellar addition to the popular Y series collection. At Vivo, we are strongly focused on offering cutting edge technology at affordable prices.”