MobiPicker
News Vivo X6 Teased Officially, Vivo XPlay 5S Delayed
Share on Facebook
Tweet on Twitter
Deal Alert: 49% Off on ExpressVPN
Touted as #1 VPN in the world, ExpressVPN is now offering 49% off & an additional 3-months of service on its annual plans.

Looking at the recent developments regarding the next Vivo flagship, it was quite imminent that the company would unveil the Vivo XPlay 5S that has been leaking out from quite some time now. However, the company has surprised us by teasing its next flagship smartphone in China, the Vivo X6! 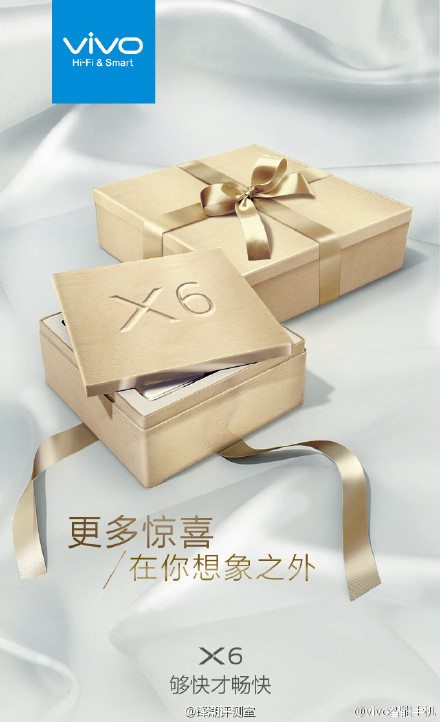 The teaser does not reveal any more details or specifications about the Vivo X6. But we can make a rough guess about the unopened package in the image, and it might turn out to be the Vivo X6+. Anyway, the Vivo X6 is supposed to come with a lot of power under its hood, and will apparently come with a deca-core Helio X20 (MT6797) processor. 4GB of RAM and 32GB internal storage is expected in the phone, which might also get a 6-inch 2K display with 2.5D Gorilla glass. Some rumors also suggest the X6 to come with 3D touch capabilities and Hi Fi audio.

Previous rumors say that the Vivo X6 may come with a 21MP rear shooter with dual tone dual LED flash, and a 12MP front snapper for excellent selfies. The phone might also get a physical shutter button. A 4,000mAh battery is touted to be coming with the X6, while the phone might run on Android 5.1 Lollipop.

Latest leaks state that the Vivo X6 will launch soon, while the much-rumored Vivo XPlay 5S might be delayed by a few months and get a launch only in 2016. Till then, treat yourselves with a few leaked photos of the Vivo X6!