MobiPicker
Mobiles Android Vivo V5 vs. Oppo F1s vs. Gionee S6s: Price, Specs, and Features...
Share on Facebook
Tweet on Twitter
Deal Alert: 49% Off on ExpressVPN
Touted as #1 VPN in the world, ExpressVPN is now offering 49% off & an additional 3-months of service on its annual plans.

Three models chosen for today’s specs clash offer superb selfie experience. Whether with a high-resolution front-facing camera or with a flash found on the front, these smartphones are trying to reach selfie lovers from around the world. Aside from serious selfie snappers, the three models facing today all have large 5.5-inch screens. Let’s see which of these selfie phones is the best, and what the biggest differences between the three are.

Design-wise, Oppo F1s and Vivo V5 look pretty similar, with almost exactly the same design borrowed from recent iPhone models. The large Home screen on the front, two antenna bands along with the main camera lens placed on the upper left part of the backside are the main features found on the outside of both models. Gionee S6s looks like some model from Sony’s Xperia Z line, with sharp edges and lots of space below and above the screen; the backside differs from the one seen on Xperia Z models since it has a fingerprint sensor and the main camera lens placed on the upper middle part of the back.

Vivo V5 and Oppo F1s are powered by the same chipset. You can find MediaTek MT6750 (Octa-core 1.5 GHz Cortex-A53 along with Mali-T860MP2) under the hood of both phones. The solution is a bit dated, not quite good for the newest games, but good enough to make the work perform pretty snappy during everyday usage. Opps F1s features 3 gigs of RAM and 32 GB of expandable (dedicated SD card slot) internal storage. Vivo V5 is equipped with 4 GB of RAM and 32 GB of built-in storage (which can be expanded via SIM 2 slot).

Gionee S6s has Mediatek MT6753 (Octa-core 1.3 GHz Cortex-A53, with Mali-T720MP3 GPU) chipset. Even weaker GPU chip than the one found on previous two models will limit your gaming forays. The processor is powerful enough to run most apps, as well as the OS,  with relative ease. The phone packs 3 gigs of RAM and 32 GB of expandable (SIM 2 slot) built-in storage.

As is the case with chassis and chipset, Oppo F1s and Vivo V5 sport very similar screens. They both feature 5.5-inch 720p IPS LCD screens that suffer from poor sharpness (267 ppi pixel density) but have nice colors and the right size for making movies to look nice, and for web surfing to be enjoyable. 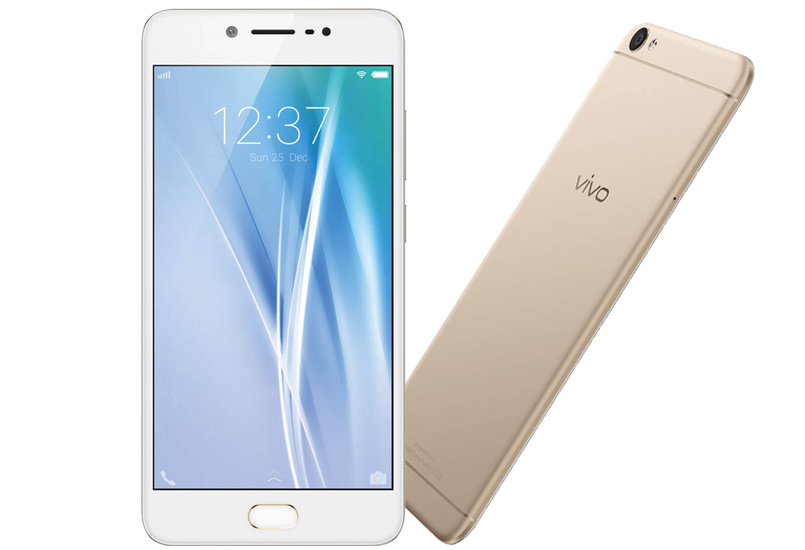 All three models have some special features found on the front-facing camera. The F1s packs 16 MP (f/2.0) selfie camera, capable of recording 1080p videos but not having any kind of autofocus. The main camera counts 12 MP (f/2.2), supports phase detection autofocus, LED flash, and HDR, and is capable of recording [email protected] videos.

Vivo V5 has a huge 20 MP (f/2.0) camera on the front. As with F1s, you won’t find any kind of autofocus nor a LED flash on the front, with selfie camera being capable of recording 1080p videos. The main camera has 12 MP and supports phase detection autofocus, LED flash, and HDR. It can snag [email protected] videos.

Gionee S6s doesn’t offer a high-resolution front-facing snapper. Instead, while the selfie camera counts “just” 8 MP (f/2.2) it is equipped with LED flash, for making perfect selfies during the night. No autofocus here either. The main camera counts 13 MP (f/2.2), has phase detection autofocus, LED flash, and HDR, and is capable of recording [email protected] videos.

Gionee S6s has a 3150 mAh battery; not the largest one available but big enough to last a whole day. The F1s packs a 3075 mAh battery; again, not the biggest one but enough for avoiding the charger until going to bed. Vivo V5 has a battery with a capacity of 3000 mAh. All three models sport a fingerprint sensor.

While the F1s and V5 pack high-resolution selfie cameras, we think that Gionee S6s made the best selfie solution by placing LED flash on the front. Simple, it’s better to have a flash on an 8 MP camera, than having 20 MP without flash, making the camera useless in the dark.