“Love in the Moonlight” star Park Bo Gum hosted a fan meet in Singapore on Saturday. Surprisingly, “Descendants of the Sun” lead actor Song Joong Ki guested at the fan meet. After having affectionate photos and admiration by the two, the Korean actors are openly supporting each other. 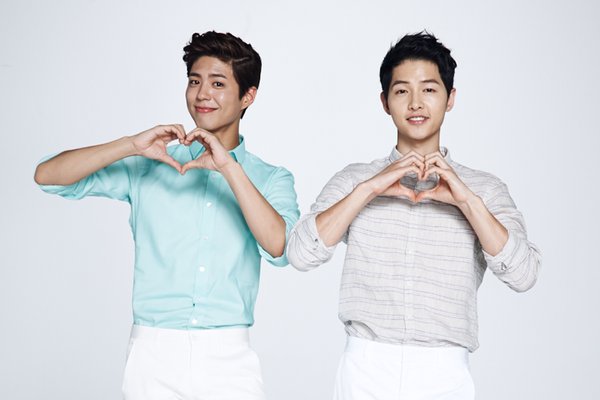 Surprising enough, Park Bo Gum expressed his gratitude for Song Joong Ki’s support at the Singapore fan meet. According to a tweet from SJK Official Singapore Fan Club, Park Bo Gum said “I love you” to Song Joong Ki which made him very uncomfortable. Of course, the fans were there to witness this and they are more than overwhelmed as seen in the video.

Bogum said God Bless You and I Love You to Joongki, making him so shy XD

Song Joong Ki became really shy after the fan meet, but his discomfort did not start there. In a Thailand fan meet, Park Bo Gum was asked about how he sees the actor. He replied that he thinks he has a nice face, voice, and figure.

And just when you think it was done, Park Bo Gum added a comment “If I were a girl, I’d like to date him. This is true. I want to be with him.” This caused, even more, tension for Song Joong Ki.

Song Joong Ki tried to get back by replying that he has Lee Kwang Soo already. This was, in fact, true since the two have been friends for a long time. They worked together for “Running Man” where they met in 2010. This lead to their good friendship ever since.

Song Joong Ki and Lee Kwang Soo worked together again in 2012 for the KBS drama “The Innocent Man”. They played as best friends in the drama. In the popular series “Descendants of the Sun” where Song Jong Ki starred as a lead character, Lee Kwang Soo made a cameo appearance.