Verizon’s Nexus 6 will soon be readily available for purchase this week at verizonwireless.com, as well as in shops next week, based on a conversation with company’s representative. The representative named Beth M, confirmed the launch of phablet  online on March 12 followed by all stores on March 19. 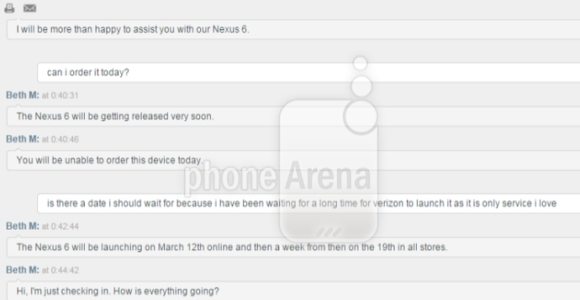 According to another source, the Verizon’s Nexus 6 will be available at $249 on a two-year contract, or $29.16 per month on Verizon Edge plan, and finally it would cost you $699 sans-contract.

When it comes to camera, the apparatus features a 2MP selfie camera at front as well as a 13MP rear shooter.

If you are not aware, the Verizon wireless to start pre-order for newly announced Galaxy S6 and S6 Edge starting from April 1.