Samsung Galaxy Tab S3 is on its way and is expected to be unveiled in during the Q3 of this year. While all the eyes are hooked to the release of the upcoming tablet, the Korean tech giant rolled out the Android 6.0 Marshmallow update for its previous year’s flagship tablet Samsung Galaxy Tab S2 on the Verizon Wireless.

The Samsung Galaxy Tab S2 was launched during the mid-last year. The device sports a 9.7-inch QHD (1536 x 2048 pixels) Super AMOLED display and is powered by the Qualcomm Snapdragon 652 processor coupled with 3GB of RAM. It packs an impressive non-removable  5870 mAh Li-Ion battery and comes in 32GB/64GB internal memory variant which can be expanded via microSD card.

This latest update will upgrade the firmware version of the  Samsung Galaxy Tab S2 to version MMB29K.T817VVRU2BPE1. The Android Marshmallow will bring a host of new features to the Galaxy Tab S2 like Doze for better battery life, customizable app permissions, Google Now on Tap and much more. Verizon has started rolling out the update over-the-air and it is expected to reach all the users in a day or two. If you still haven’t received the OTA update, you can manually check for the update by navigating to Settings> About phone> Software updates> Check for Updates.

Please keep your Galaxy Tab S2 properly charged before updating and use a powerful and stable WiFi connection to download the update. Also, it is advisable to make a backup of important files although the risk is too low. But, better safe than sorry. 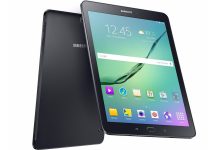