Remember Sony VAIO laptops? In case you don’t know, Sony had sold off the brand to a Japanese company in 2014 though it still has a minority stake in it. Well, VAIO had released its own VAIO Phone in 2015 running Android, followed by the VAIO Phone Biz in 2016 that runs in Windows 10. Well, it looks like the company is working on a successor to that device, which might be called the VAIO Phone Pro. 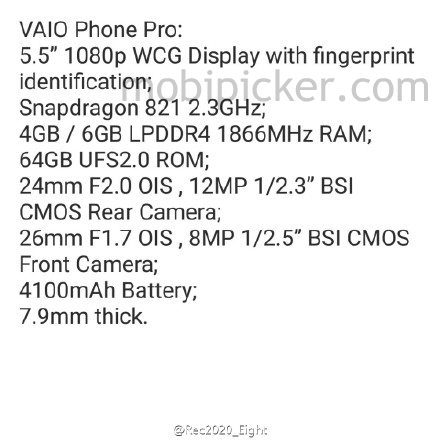 A Chinese @Rec2020_Eight has leaked out the specs of the alleged VAIO Phone Pro on the Chinese microblogging site Weibo. According to the leak, the smartphone will be powered by the upcoming Snapdragon 821 processor, which is said to be the successor of the Snapdragon 820. Clocked at 2.3GHz, the processor will be accompanied by 4GB and 6GB 1866MHz LPDDR4 RAM.

The VAIO Phone Pro will be sporting a 5.5-inch Full HD WCG display along with a fingerprint sensor and will come with a large 4100mAh battery to feed the powerful chipset. The phone will be 7.9mm thick and will feature 64GB of UFS 2.0 internal storage. The device will come with a 12MP BSI CMOS rear camera with f/2.0 aperture and OIS (Optical Image Stabilization) along with an 8MP f/1.7 BSI CMOS front camera with OIS.

Looking at the specs, the VAIO Phone Pro seems to be a beastly flagship device. Other rumors from China suggest that the device, just like its predecessor, will run Windows 10 out of the box, but an Android variant will be very much appreciated. It is also expected that the phone wil get USB Type-C and will support 4K at 60fps output.

The Weibo user who leaked this information has a decent record of leaking accurate information in the past, so we can trust this information with a pinch of salt. Anyway, as we said, the specs look exciting and the rumored Snapdragon 821 processor will make this phone a beastly performer.