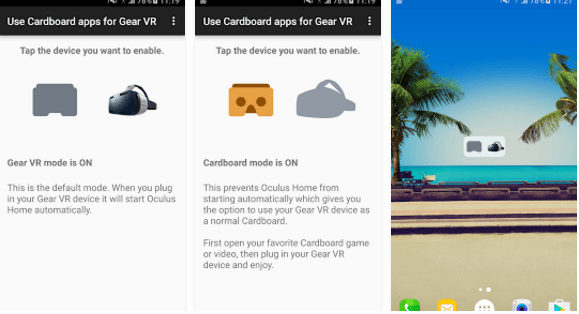 In truth, the app has a mouthful of a name, but it delivers what it promises. The app offers a way to use Cardboard apps with the Gear VR. With only one tap, you can switch between the Gear VR mode and the Cardboard mode once you connect the headset. Also, through a widget, you can switch between the modes directly on the home screen. The app automatically turns off the Gear VR service on your smartphone to prevent the Oculus App from auto-starting.

However, there are a few things you should keep in mind. First, the app does not make the Gear VR headsets compatible with other Android phones; you still need to own a Samsung Galaxy Note 5, Note 7, Galaxy S7, Galaxy S7 Edge, Galaxy S6, Galaxy S6 Edge, and Galaxy S6 Edge+ and other Galaxy smartphones produced after the S6 line.

Also, note that the app requires Administrator Privileges, so to uninstall it you need to disable the admin access or uninstall it directly from the settings menu in the app.

The app will cost you $0.94, a small price to pay to enjoy the wide range of Cardboard apps compared to buying the rather uncomfortable Google headset. So far the app has 100% positive feedback on Google Play Store. Customers seem extremely satisfied with the app. You can download the app from Google Play Store.

Have you downloaded the app? How does it feel using the app? Drop your opinion in the comments section below.