Microsoft’s team of developers is working pretty hard in bringing Windows 10 and Windows 10 Mobile devices in sync, and one such way is allowing its consumers to use their phones for unlocking PCs and logging into their desktops via a custom developed app.

A Twitter user, @h0x0d noticed an app which is in internal beta testing called Phone Sign-in. This app is a reworked version of the Authenticator app which allows users to sign into your Microsoft account on a Windows 10 computer instantly, thus adding a new security layer to a PC upgraded to the latest version of the OS. 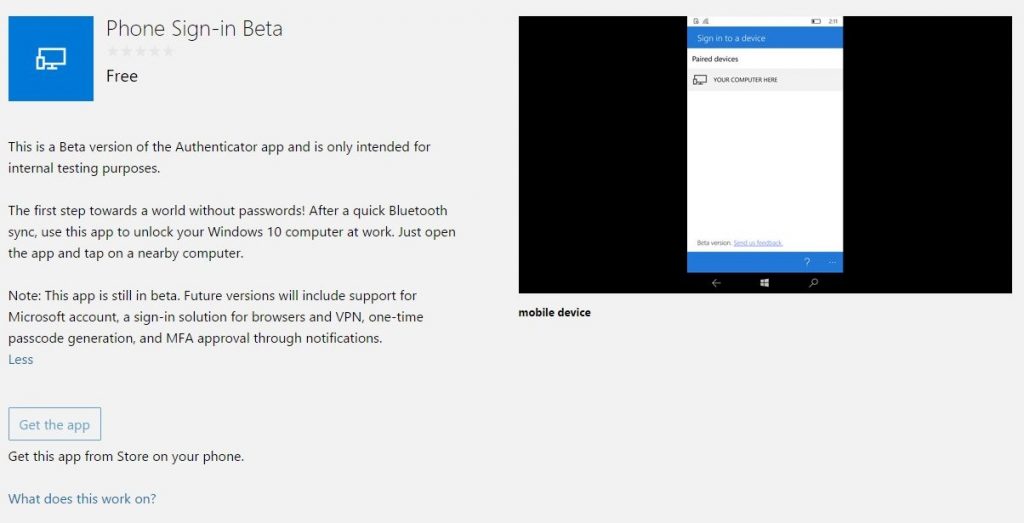 Microsoft explains, ““The first step towards a world without passwords! After a quick Bluetooth sync, use this app to unlock your Windows 10 computer at work. Just open the app and tap on a nearby computer”

The app can indeed be found in the store but you can’t use it just yet since it’s still a limited beta. Reading the description reveals that Microsoft is working on some new features too which includes support for Microsoft account, a sign-in solution for browsers and VPN, one-time passcode generation, and MFA approval through notifications.

As of now, there is no detail when the app will be available for everyone to use, but judging by it’s availability in the store, we guess things might happen pretty soon.

Microsoft too is tight lipped about this app, but with Windows 10 Mobile about just around the corner, we might get more information sooner rather than later.

The app might launch together with Windows 10 Mobile, but for the moment, we would like to keep the hopes not too high.