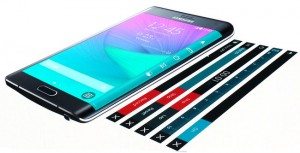 Samsung has already announced that it is bringing its Note Edge to US carriers and retailers on Friday, November 14th. The Samsung Galaxy Note Edge is arriving in in two colors, Charcoal Black and Frost White, on AT&T, Sprint, T-Mobile, Verizon Wireless and U.S. Cellular. , Best Buy and Samsung’s own Experience Stores, will also be stocking this Edgy Phablet.

Well, tomorrow is a date, when two countries’s fans can celebrate for getting the specially designed Note Edge. Firstly, the device is finally going to be launched in the US, and secondly, residents of the UK can place their pre-order for the handset, either at Samsung’s online store, or from Carphone Warehouse. The date for launch in United Kingdom has also been announced, it is November 28th.
The UK is not the only European Union country to get the Note Edge this month, Samsung has also declared that it will be bringing a “Primium Edition” of the handset to Germany by the end of this month. Not to worry, “premium edition”, as the only thing that’s changed about it is the device’s bundle. This will include a Wallet Flip cover and a 64 GB Samsung EVO microSD card.
Now, next  is always a question, how much is the cost for UK? But, unfortunately, we did not get any official announcement for the prices description. However, the price for Germany was announced to be €899 (~$1,120).Let we remind, the Note Edge features are the same awesome as of the Note 4, like a 5.7″ Quad HD display, S-Pen stylus, 3 GB of RAM, Snapdragon 805 chipset and a 16 MP optically-stabilized camera on the back. It’s just another thing is display, which is curved towards the right-hand side, allowing to view notifications and tickers.
Are you getting Samsung Galaxy Note Edge, check here.
If you like it. Don’t forget to put your comments below.