Thousands of stargazers across the world were probably glued to their telescopes in the run up to the supermoon earlier this week. However, not too many of them were lucky/vigilant enough to spot what stargazer and part-time YouTuber Rondomon from Surprise, Arizona, saw on the night of November 12, 2016.

Rondomon posted a video to YouTube that shows what appears to be two strange objects flying pass by the Moon.

“While taking video of the Supermoon, with NexStar 6se telescope, UFOs do a fly by,” the cameraman explained.

“After zooming in on the moon I walk away and sure enough UFOs start flying by,” he said, adding, “The UFOs appear to have distortion surrounding them, perhaps bending light.”

He also listed the gears he had been using that night. They include a Sony CX500V HandyCam HD, 5X optical zoom, manual focus at .9m, max view 40 lens for a 38X telescope magnification.

“A UFO in orbit that has a haze mist around it. The object is solid, because if it was transparent, we would see the light of the moon through it,” he said.

“I believe that the field around it is due to the alien propulsion because the haze has been seen in thousands of UFO photos before.”

However, not everyone seems to be convinced by the “alien” angle that Rondomon, as well as many conspiracy theorists and UFO hunters are trying to suggest. For example, some skeptics said that the “flying objects” could have been just helium balloons floating in the Earth’s atmosphere while others thought it could be something as simple as the out of focus camera capturing a leaf blowing in the wind. 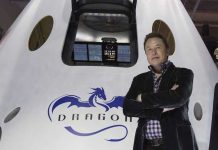 Destination Moon: SpaceX Is Sending 2 Passengers To The Moon In First-Of-Its-Kind “Space Tourism”