Tom Clancy’s The Division is proving to be filled with Easter Eggs, and the latest one uncovered references zombie TV series The Walking Dead. I don’t know what’s more surprising: the Easter Egg itself, or that it took so long since the game’s release for it to show up. Quit slacking, Egg-hunters! 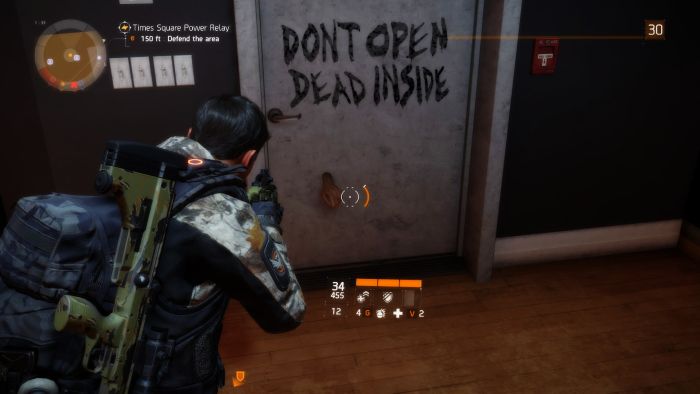 If you’ve seen the first episode of The Walking Dead, you might remember a shot where the show’s protagonist Rick comes across a door in a hospital with the words “DONT OPEN DEAD INSIDE” scrawled on it. It’s apparently been replicated in The Division, and surprisingly, they even retained the exact same font. Talk about attention to detail.

The only real difference here is that the order of words is different. I personally prefer the version seen in the game, because then I don’t have to read it as “DONT DEAD OPEN INSIDE” which sounds like a Google Translate version of Chinese packaging instructions.

This is far from the first Easter Egg to be discovered in The Division: others include references to Mr. Bean and The Uncharted series. Ubisoft Massive certainly likes having fun, it seems. Have you found any Easter Eggs in The Division of your own? Let us know in the comments below.