MobiPicker
How To 0xc000007b Error: Fix ‘The application was unable to start correctly (0xc00007b)’
Share on Facebook
Tweet on Twitter
Deal Alert: 49% Off on ExpressVPN
Touted as #1 VPN in the world, ExpressVPN is now offering 49% off & an additional 3-months of service on its annual plans.

Most of the Windows users should be familiar with the 0xc00007b error or 0xc000007b error. These errors can pop up due to a variety of reasons. However, the most common reason for “0x00007b the application was unable to start correctly” is a 32-bit app trying to execute on a 64-bit system. All the 32-bit apps are designed to work flawlessly on a 32-bit system, and may not function correctly on a 64-bit system.

We can fix the 0xc000007b or 0xc00007b error in many ways, including reinstalling DirectX and .NET framework. It is worth understanding that this error message may also occur on 64-bit operating systems when the Microsoft Visual C++ Redistributable Package is not correctly configured. 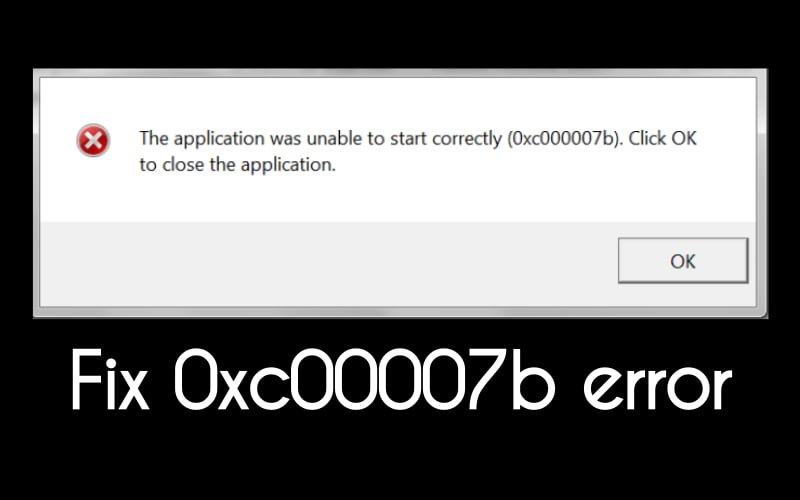 Note that there are same solutions to fix both 0xc00007b and 0xc000007b error. Hence, we will be referring any of the error code inside the article but the solutions will work for both of them.

Also Fix: This copy of Windows is not Genuine

Sometimes, something as simple as reboot fixes the 0xc000007b / 0xc00007b error. After reboot, the application which used to show ‘the application was unable to start correctly‘ may start working without any issues. 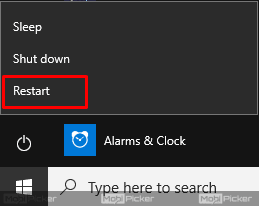 Windows updates usually contain bug fixes and security enhancements. A simple Windows update could fix 0xc00007b error. Even if the update doesn’t fix this particular error, there is no harm in updating the operating system. These updates always bring some known and unknown bug fixes, so if not 0xc00007b, it will surely fix some of the existing bugs.

To update the Windows, go to Windows Settings and then tap on “Windows Update.” There you can see if the updates are available.

If rebooting and updating didn’t resolve the 0xc00007b error, you may have to reinstall.NET Framework or DirectX.

.NET Framework is a programming infrastructure created by Microsoft for building, deploying, and running applications and services that use .NET technologies, such as desktop applications and Web services.

You can easily reinstall .NET framework by following the steps given below.

Step 2. Locate the downloaded file and double click to start the installation process.

Step 3. Follow the onscreen instructions and restart the PC once installation is finished.

Re-installing .NET Framework usually resolves 0xc00007b/ 0xc00007b error associated with ‘the application was not able to start correctly’. If this doesn’t fix the 0xc00007b error, you may want to try reinstalling DirectX.

If you are not yet aware, Microsoft DirectX is a collection of application programming interfaces (APIs) for handling tasks related to multimedia, especially game programming and video, on Microsoft platforms. Initially, the names of these APIs all began with Direct, such as Direct3D, DirectDraw, DirectMusic, DirectPlay, DirectSound, and so forth. The name DirectX was coined as the shorthand term for all of these APIs (the X standing in for the particular API names) and soon became the name of the collection. When Microsoft later set out to develop a gaming console, the X was used as the basis of the name Xbox to indicate that the console was based on DirectX technology. The X initial has been carried forward in the naming of APIs designed for the Xbox such as XInput and the Cross-platform Audio Creation Tool (XACT), while the DirectX pattern has been continued for Windows APIs such as Direct2D and DirectWrite.

Follow the steps below to reinstall the DirectX on your Windows PC.

Step 1. Navigate to C:\Windows\System32. Just go to “My PC or This PC”, open C Drive, then open Windows folder, and there you will find the System32 folder.

Step 3. After deleting, download and install the DirectX that suits for your version of Windows and runs the DirectX setup.

Step 4. After the installation is complete, reboot the system.

This should fix the 0xc00007b error. If it hasn’t, running the application in admin mode may help fix the issue.

Try running the game or application as an administrator.

3. Tick the ‘Run this program as an administrator‘ box and click on OK. 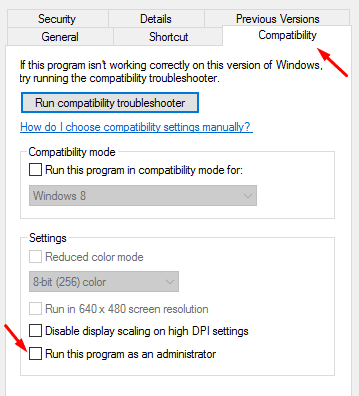 Users who upgraded to Windows 10 have complained that they are seeing the 0xc000007b error when starting games. If you are facing this issue, following solutions are worth a try:

Uninstalling and reinstalling the game/app may fix the application was unable to start correctly 0xc00007b / 0xc000007b error. To uninstall the program on Windows 10, follow the steps below.

Step 1. Head to “Uninstall or change a program”

Step 2. Now select the program you wish to remove and then click on “uninstall” option.

Step 3. Follow the onscreen instructions to completely uninstall the program from your Windows PC.

Step 4. Now locate the .exe file and install it again as you installed it initially.

To get rid of 0xc00007b error, you should try to run the game/app in compatibility mode. Follow the steps below.

Step 1. Right-click on an app and select Properties. You can do this from the app’s shortcut or by navigating in File Browser to the .exe file.

Step 2. Select the Compatibility tab, then check the box next to “Run this program in compatibility mode for:” 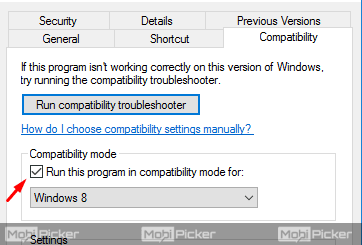 Step 3. Select the version of Windows to use for your app’s settings in the drop-down box. 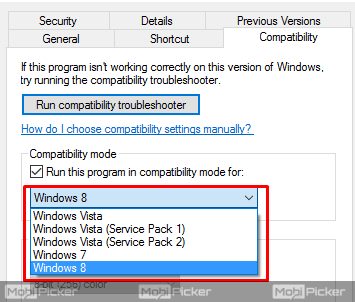 Step 4. Hit Apply, then run your app and see if this solves the issue.

Step 2. Search for Display Adapters and expand it. 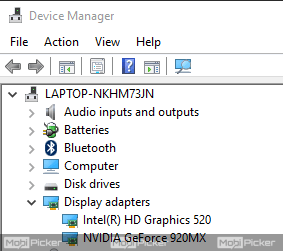 Step 4. Now select “Search automatically for updated driver software,” and proceed to update if any display driver update is available.

These solutions should help you fix “0xc00007b error the application was unable to start correctly“. From DirectX to compatibility issues – the problem could lie anywhere. We hope this step-by-step guide helped you narrow down the issue and fix the annoying 0xc000007b or 0xc00007b error. If you know any other solutions which may help to fight “the application was unable to start correctly” error, share with us in the comments below.