Elon Musk’s Tesla is not alone. There are companies vying to compete in the electric car space and to show the world that they have the technology that beats Tesla hands down. NextEV has already launched NIO EP9, which is now the world’s fastest electric car. EP9 beats Ferrari 488GTB and Mercedes-AMG’s Electric SLS. And now, Faraday Future is taking on Tesla.

Faraday Future, in case you haven’t heard about the company yet, is a Chinese-backed American start-up technology company focused on the development of intelligent electric vehicles. Named after the famous English scientist Michael Faraday, Faraday Future was established in 2014 and has its headquarters in Gardena, California. The company released a teaser video this week ahead of the company’s big “Reveal Event” next month. The upcoming SUV model, the teaser claims, can beat Tesla’s Model X hands down. That’s indeed fabulous!

The Youtube video shows feature-packed Faraday Feature beating the competition with ease. The video shows three icon vehicles lined up for the race – Bentley Bentagya, Tesla Model X P100D and the Ferrari 488GTB. The video titled “Faraday Future vs The World” looks interesting and is probably edited to show how well the car fares against the iconic models in the industry. But then, can Faraday Future really take on Tesla?

In spite of the financial stress, the company is all set to unveil its EV early next year. It remains to be seen if the company will get its financials back on track and if it will indeed take on Tesla. 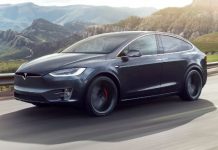