Dying Light is an FPS open-world video game developed by Techland for PC, PS4 and Xbox One. Though the game was originally scheduled to land on PS3 and Xbox 360 too, but these versions were later canceled due to hardware limitations. Dying Light is one of the best zombie survival video games ever made and is still being loved and played by many. If you are one of those people who still love the game, then the following offer that Techland has announced is for you….well if your rich, then for you.

Techland recently took it to twitter where they just simply announced a Dying Light Limited Edition which can be bought from the retailer GAME. Well, it’s not like other Limited Editions which come with some extra in-game content and retail for around $80 to $100. But in case of this one, this Limited Edition is available with the price tag of $10 Million, yes Million. 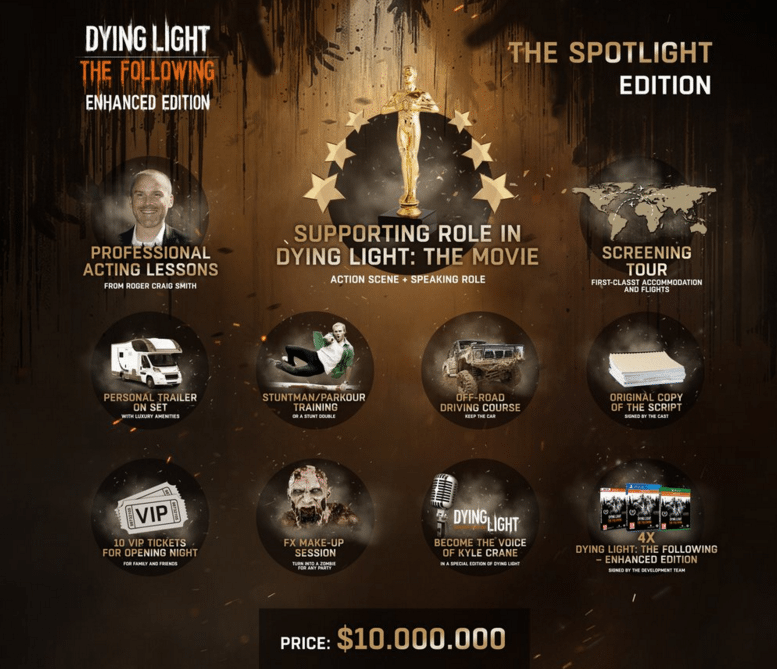 The price tag isn’t high considering the fact that you get real life content including a supporting role in the upcoming Dying Light film. If somehow you don’t know to act, then don’t worry as this Limited Edition will also include acting lessons from Roger Craig Smith. You will also get parkour training along with some other stuff.

This Edition also hints a possible Dying Light movie as it’s the first time we’re hearing something regarding it. Whatever the case is, the chances of this to be a joke are high as GAME also listed a $1 Million Edition of Saints Row IV some time ago, which was later revealed as a Joke.

Dying Light was first announced in May 2013 and was later released for PC, PS4 and Xbox One on January 27, 2015. An Enhanced Edition of the game was released a few days ago for all three respected platforms.